How full is full?

I was contacted this week by a gentleman who wanted to talk about drains.

It was never my ambition to become Newcastle’s Drain Man, but so be it. The man was a hydrologist and was preparing a brief in response to the Australian Institute of Engineers’ proposed revision to its guidelines on drains and waterways. Having investigated the Wollongong floods he was now looking at Newcastle, started his research in the City library, and was directed to “that man who walks around in the drains a lot”.

We had wide-ranging chat about things drainy, and one of the topics we covered was how high it got during the Pasha Bulker flood. He’d heard reports that the water was close to the underside of the Chatham Road bridge, which I pooh-poohed. No way did it get that high.

After he’d hung up I started wondering: had I been to quick to dismiss this claim? Fortunately, by coincidence a Drain Correspondent got in touch with pictures of the creek during the super storm. The following pics are all courtesy Isaac: cheers, mate. 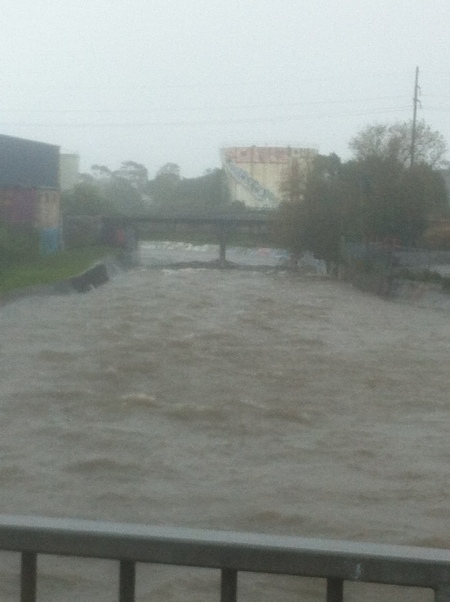 This one shows just how close to the top of the concrete banking the water came. But, hats off to those olden times engineers, they got the capacity pretty well right. I’ve never seen it spill over here, or anywhere apart from the section near Hamilton North Public School and the showgrounds.

What of further upstream?

This photo, taken nail-bitingly close to the edge of the bank, shows that at Chatham Road bridge the water is nowhere near the underside, which is exactly as I remember it from the Pasha flood. 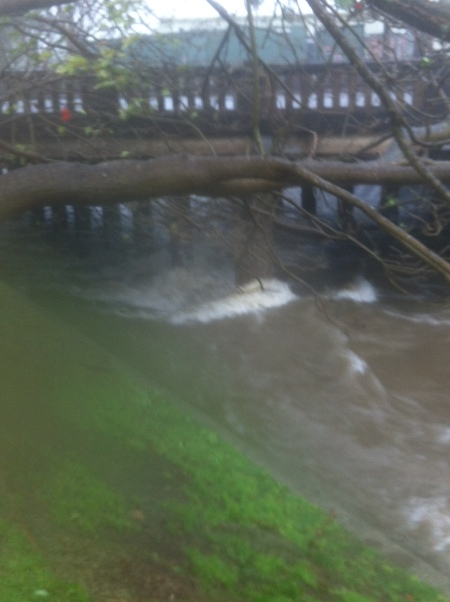 I really do have to hand it to those Victorians, and the Edwardians who followed them. They sure knew how to build their urban infrastructure, whether it was sewers, drains or dams.

The only time they got it “wrong” was the capacity of roads and bridges. They could never have predicted how much we would take to the motorised carriage; in fact, they’re still getting it wrong in Sydney now. Like drains, roads tend to spill out once they’ve reached capacity. But while we’re prepared to neglect our waterways we’re quite happy to lease our ports or electricity infrastructure in order to spend money on our roads. What a selfish species we are.

This entry was posted on Friday, May 29th, 2015 at 4:45 pm and is filed under Uncategorized. You can follow any responses to this entry through the RSS 2.0 feed. You can leave a response, or trackback from your own site.