A nip in the air

March hasn’t been able to make its mind up: it hasn’t let go of summer, neither has it embraced autumn. At night I’m still throwing off the doona then pulling it back on, hot one minute and cold the next, and my hay fever’s all over the place.

Nature’s in limbo too, though I do feel a quiet sense of urgency starting to gather its grip around the creatures of the creek. We don’t have an arctic winter in Newcastle but we do get a cold time, and so if you haven’t got a layer of fat on you by now then you may struggle in May. If you’ve been so rash as to have a clutch of chicks, well, you’re pushing your luck, I reckon.

The gasworks is full of fungi.

The big tall bamboo-like grass on the banks of the Styx has exploded into fat candles of seedheads.

There’s a native grass in the gasworks which, given the chance, will spring up after a slashing and some rain. At sunset the heads of the grass catch the slanting rays, and the whole area seems to glow as though a soft pink mist had settled across the land in a way that I don’t have the photographic skills to capture. Trust me!

A Darwin friend happily Facebooked the other day to say that the dragonflies had arrived, a sure sign of the forthcoming dry season. Here, the dragonflies are getting dopey and starting to crash into the ground, into each other, into clumps of lantana.

This guy even crashed into me, staggered around a bit, took a breather on my finger before humming off to do whatever it is that dragonflies do in late March. 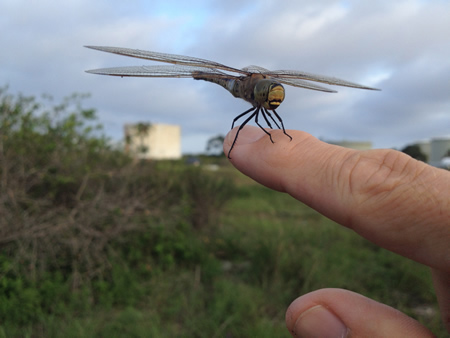 A pair of brown falcons have been gliding around at dusk, working the area normally worked by the black-shouldered kites. Have the muscled the territory? A few weeks back a pair of grey goshawks were nesting in the one of the few tall trees on the railway land, which I didn’t comment about until their chicks had fledged and moved on.

I came across this grim kill site; maybe a young sulphur-crested. 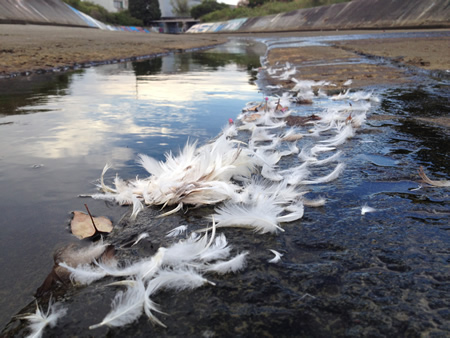 The trail spread right upstream. This was no chick, it must be an adult bird.

Or, erm, a feather-stuffed pillow. Whoops!

And then, just as I was laughing at myself, I found these feathers in the feathers.

Yes, autumn really is getting closer.

There’s a bloke who goes down the dog park. He told me once that he’d been in a band and they’d had their band photo taken outside the Newcastle Gas and Coke building, back in the 80s or similar. It is a great place for a band pic; I mean, gas and coke?

Next best venue in Hamilton North would have to be Styx Creek, or even better the bridge over Chatham Road. Like, right about here … 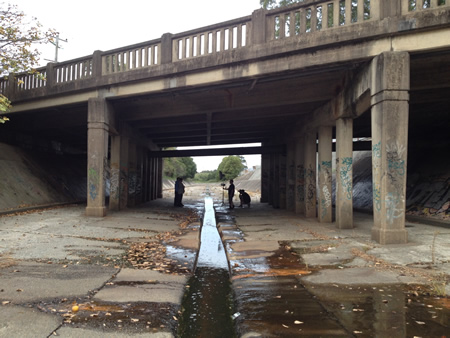 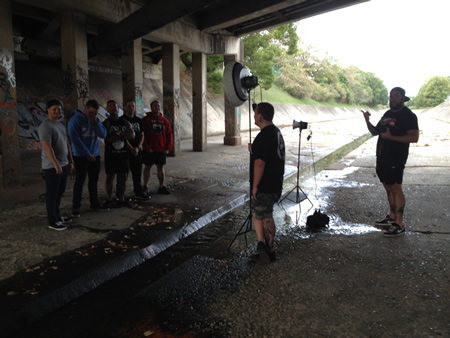 Unfortunately, there’s nothing dark or brooding about Jambo. He bounced around, being all waggy tale and “Throw the ball!” They were a good-natured bunch. So next time you’re in you’re record shop and looking to pick up some vinyl, go no further than Taken By Force. You saw it here first.

I have never seen a snake in the gasworks. Seen loads of blue-tongues, and I’ve heard lots of swift rustling noises through the dry grass, and I do tend to wear closed-in shoes when I’m walking with Jambo. But never actually seen one. I was talking to one of the ELGAS blokes the other day; a mate had seen what he thought was a brown sunning itself by the gas bottles. When he went towards it old Joe Blake slithered off into the dense pines near former manager’s home. So, maybe, one day I’ll have an encounter. 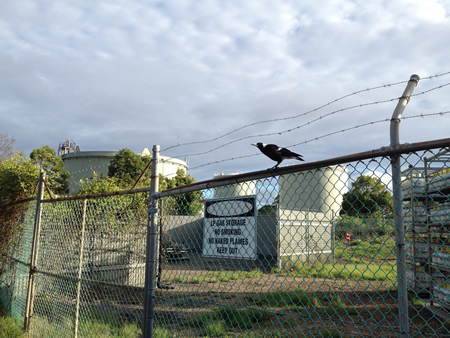 As we got talking, me and the ELGAS bloke, he mentioned that they’d had a minor bombshell: they have to be off the site by June. I was as taken aback as he was, at first, but the more I thought about it the more I decided that it fit perfectly with the other dots that have been emerging around the gasworks site for a while.

The first dot followed the fire, late last year, in the wash-up building. It’s all gone now, though you can still see the gutters in the concrete where the basins once stood.

I got a phone call from someone connected with Jemena at the time of the fires (there were two of them) and we had a bit of a chat about various things. One of them was the possible use for the gasworks site, which is heavily polluted. The person I spoke to didn’t seem to think that rehabilitation would be much of an impediment to redevelopment although (almost as an aside) the idea of capping the place with bitumen and making it a park-and-ride station for the proposed transport hub was a possibility.

Then, in December we got a letterbox drop notifying us of major “improvements” to the junction at the bottom of Donald Street bridge. At first I thought it might have been something to do with the difficulty people have turning west onto Griffiths Road, especially the petrol tankers.

But the dots kept appearing, and I kept joining them. Given that the current NSW Government is extremely keen to push development of the rail site through this calendar year, I got to thinking about what the I’d talked about on the phone, and the road development, and quick-smart order for ELGAS to get off the gasworks site.

I think, dear Hamilton North residents, we can expect to see action at the eastern end of our suburb within the coming months. I also think we can expect to see more traffic if this does go ahead, particularly along Clyde Street and Chatham Road. I don’t think I’ll be to stand in the middle of Boreas Road at sunset and take a photo like this without being flattened. 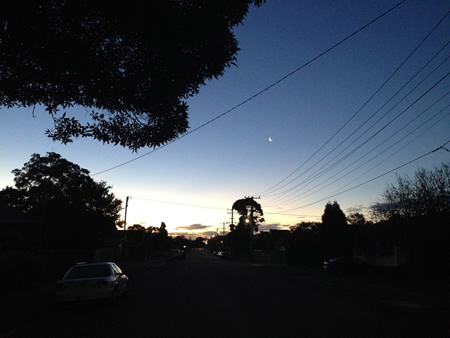 (There’s nothing showing up on the NCC planning and DA site. Anyone got any other info?)