I can’t look at a Space Hopper without thinking of Aquilino Cosani, designer of the Pon-Pon.

Well, OK, so I’d never heard of him either. I just Googled “who designed the freaky face on space hoppers” and found this article. Now Cosani is my hero. Imagine not patenting a toy that sent the whole world bonkers simply because “the market was big enough for all of us”.

Those crazy Italians! I love ’em! 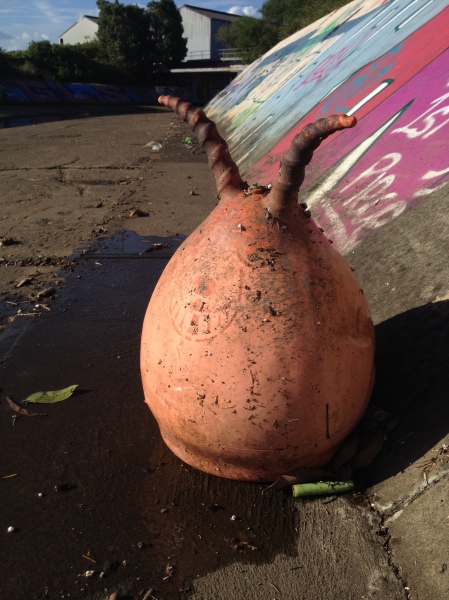 A constant in a crowded market

I’m no expert, but it seems that most graffiti tag names tend to be single syllable: POAS, CUBE, OBEY, GUNZ, HACK and so on. I thought that this one was BLUE until I met him and discovered it was BLUF. Go figure.

It’s a crowded market though and, inevitably, even the most creative taggers run out of single-syllable names. I’ve seen a lot  more of the likes of this: 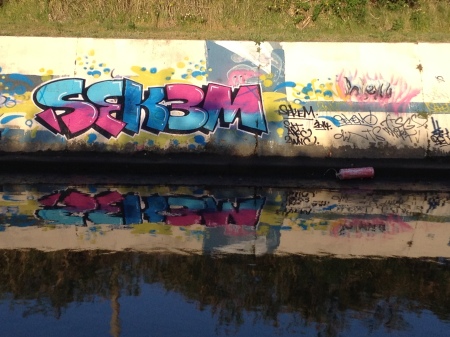 One constant amongst all this flux and turmoil is our old mucker H-Foot.

There are a lot of small things that, collectively, make H-Foot different to other taggers. Choice of medium (pen rather than can) is the most obvious. At one level this could imply a lack of the kind of commitment shown by the old school roll-up artists who had to steal wheelie bins and haul them – loaded with 20 litre paint tins, trays, rollers and poles – around the drains, building sites and railway lines of the city. Even the aerosol kids are making a significant commitment in terms of the amount of time they have to spend on site, and there’s always the issue of being caught with a green bag full of rattling cans.

H-Foot not only prefers the quick in-and-out of the fat pen, s/he has even used stickers for über-fast stick-ups.

It’s not just the medium that’s different; there’s a difference in H-Foot’s intent too. Sure, the “I was here” impulse is similar (why else the stickers?) but there’s also a sly humour that sets H-Foot’s work apart.

H-Foot’s confidence as a social commentator appears to be growing. The emergence of this kind of public satire is the critical departure point for the artist from the “Notice me!” culture of much street art.

In the white noise that characterises much of the painted adornment of our built environment (Did I really just write that?), H-Foot stands out as a constant for humour and inventiveness. 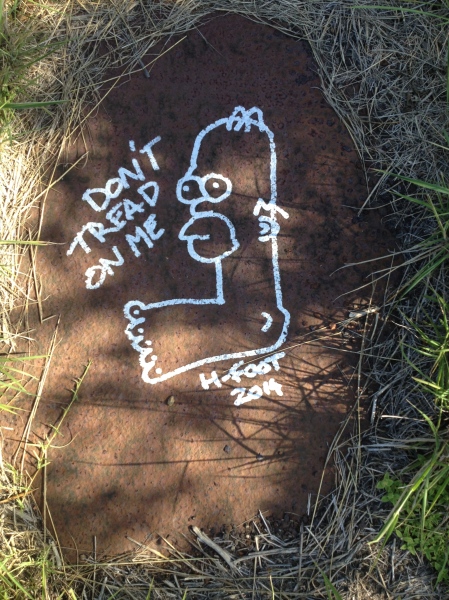 Lachlan sent me this 1960 map of Newcastle, with a detail showing the area that would become Griffiths Road, where it goes past the show grounds and over the bridge and on into Hamilton. The original is held at the UoN Cultural Collections, here.

I wondered, as I looked at this gorgeous old map, whether the generation of “Google maps on the iPhone” users would be deprived of a love of maps. I’ve always loved atlases and maps, even though I’m completely rubbish at using them. (I’m known in our house as Captain Compass, my sense of direction is so bad.) Or perhaps one day people will look back at a screen shot of Google Maps with the same fondness and nostalgia that I feel when I look at the one above.

I thought about trying to do a sound map for Hamilton North after I received this link from filmmaker friend Robert, who put me onto this amazing sound map of London’s waterways.

Clyde Street lights would have the bells clanging and a coal train rumbling past, the ELGAS depot would have had the sound of the gas sheds with KO FM blasting out, the Chaucer Street drain would have had fuscous honeyeaters squabbling in the lantana with the 12.20 Broadmeadow to Sydney train squealing past, Baird Street’s background noise would be the siren from the fuel depot.

I think it was in The Two Towers that Saruman created Isengard, his horrible HQ, to turn the bad elves into orcs and to burn all the trees to power his Dark Machinery and … stuff. I can’t remember the details but it was generally agreed among the hobbits and the nice elves that this was a Bad Thing.

The naphtha tower at the gasworks is a bit like a modern-day Isengard: its looming presence a source of noxious pollution, despoiling the landscape for miles around.

But to be honest I just can’t get cranky with it. In fact I really like it. And I’m going to stick my neck out here: I reckon that it’s become the Nobbys Lighthouse of inner Newcastle.

On our walks around the creek and the gasworks me and Jambo often bump into folk. They’re out walking too, but usually for different reasons. I’ve met students on their way to TAFE, a guy with a terminal illness who sees out his days by collecting tennis balls from the water, kids on bodgy quad bikes tearing up the mud, blokes with nets catching poddy mullet for bait while their girlfriends harrumph and fume in the car on Chatham Road, kids with shopping bags full of aerosol cans, guys with bicycles loaded up with stolen dog food, and on a regular basis I’ll see groups doing fashion shoots / album covers / uni portfolio work. And all of them, like a scene from Close Encounters of the Third Kind, are drawn to the naphtha tower.

I’m not sure if it’s because if its size and shape, this huge vertical edifice rising from the flattened landscape. I don’t think so because there’s half a dozen fuel towers on the southern side of the creek, and no one photographs them. It could be the POAS and CUBE roll-ups that immediately draw the eye and add a human element.

Where I’m from, in Cumbria in the UK, there’s been an explosion in the number of wind farms over the last two decades. I know people who hate them with a passion, and I mean really hate them. Wind farm developments have been halted where they might impact on the aesthetic value of the Lake District National Park and there are numerous objections to those that do exist.

And yet these same people hold up as shining examples of the area’s “natural beauty” the rolling fells and the lichen-encrusted drystone walls. Those fells are only rolling because they’re a post-industrial landscape, denuded of trees by the gangs that burnt charcoal for the early iron smelters. And those characteristic drystone walls? I see them and I see two things: the backbreaking slave labour that was necessary in order for them to exist; and the affront to nature and the senses of a manmade boundary carving through a hillside like some map of the Middle East or central Africa. (This photo from here.)

Our landscape, and our interpretation of it as either beautiful or hideously ugly, is the end result of generations of historical accidents. I was in northern Victoria this week, in the foothills of the high country, and the landholder I was with pointed to a series of naked paddocks and proudly told me how he’d “cleaned up” all that land. “Clean” was not the word that sprang to mind when I looked at it, though I could see that it was indeed productive country, just as the fells of Cumbria are “clean” and productive. Only today, as I was typing this post, a friend sent me a picture and a story that puts this whole predicament in a nutshell. Marie-Anne wrote:

I was out exploring this morning and became quite smitten with the part of Lambton Park where the creek naturalises. So much so that I took photos of the spot where it’s swallowed up by concrete drain. An old bloke came up from the other side, asking if I was from Council or at least taking photos to complain to Council. Where I saw an oasis of rampant lushness, he saw a mess that should be tidied up and concreted underground! We were each so surprised by the other’s perspective that we stopped to have a laugh about it.

My brother-in-law remembers the Manchester of his childhood being dotted with mill stacks. When the industry died and they were knocked down people couldn’t wait to see the back of them; now those same folk pine for the disappeared landscape of their childhood.

As part of Jemena’s clean up of the gasworks site Isengard will, unfortunately, have to go. It’s such a shame. I’ll miss it, and I’ll miss POAS and CUBE and the landmark which, like Nobbys at the foreshore, dominates and creates a visual focus for Hamilton North. 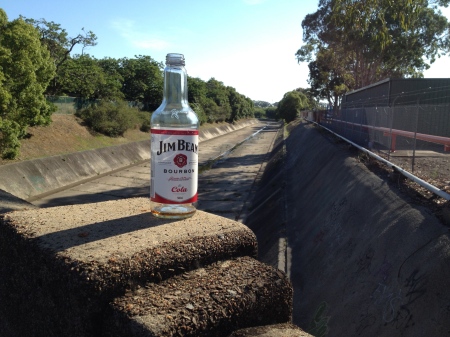