When another Australian Open has come and gone and, once again, there are no Australians in the final, then the only thing to do is throw away your ball. And your racquet … 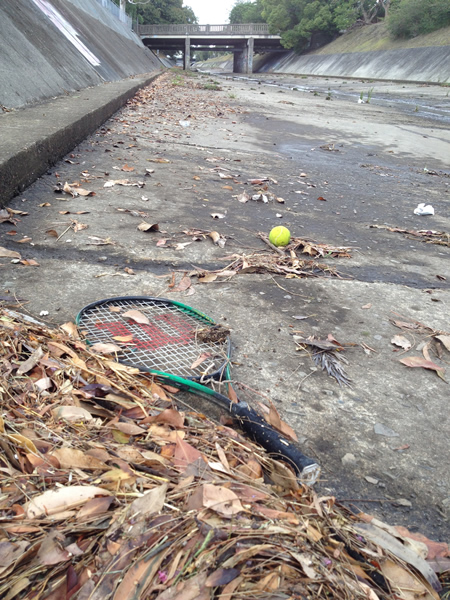 When you wake up and a hot January sun is slanting into the verandah to reveal the detritus of last night’s debauchery, yet you know you must brace yourself and do it all again …

It must be time to get that southern cross tattoo you’ve always dreamed of. Yes, it must be Australia Day in Hamilton North. 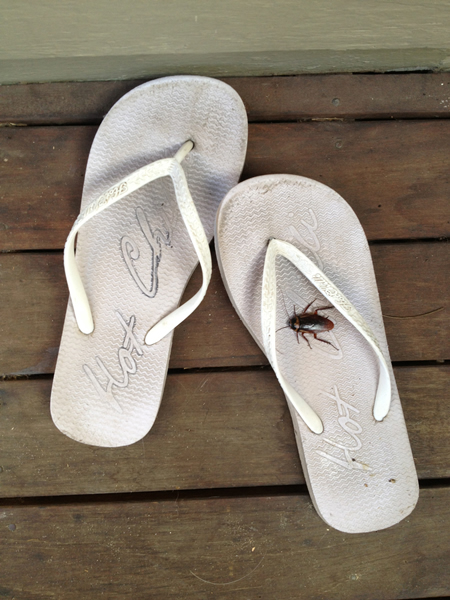 This is the Styx

Because of the tide times I’ve been altering my morning walks with Jambo. Instead of going downstream towards the TAFE I veer off southwards and follow the small water course that enters the drain just east of the fuel depot. This is the original Styx Creek, the one that shows up on the old maps and heads down Samdon Street and, many moons ago, through what is now Gregson Park and on to its headwaters. 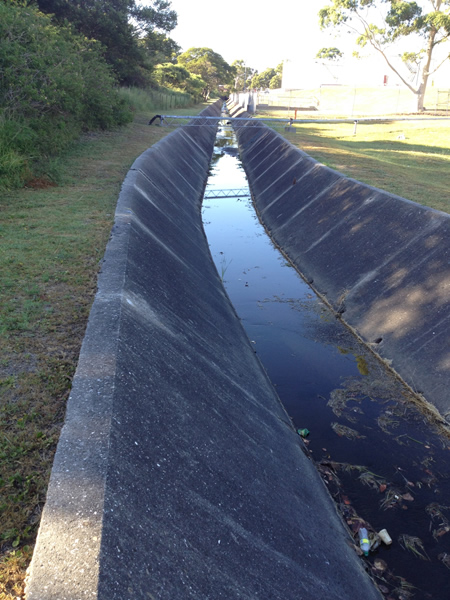 It’s a nice walk in the morning. The bamboo, which had grown up since Google Maps took the aerial photos at the height of the drought, provide a screen from the train tracks and give it a secluded feeling. It’s now channelled and appears on maps as “Chaucer Street drain” though, if I had my thinky hat on, I could probably come up with some quip about this being the entrance to the underworld or the gateway to Hades, and the wagon of coal could come in there too … but, well, I can’t think of anything.

The eastern side is covered in dense bamboo and lantana. The other day I heard my first whip bird in there in AGES, and it’s a favourite place for the black ducks to nest. Foxes like it, and Old Mate reckons there are escaped and feralised guinea pigs rustling around the place. Which sounds bizarre, but I’ve no reason to doubt him. On the western side is the pristine lawns of the fuel depot.

Not so pristine is the leakage from the fuel depot. On sunny days you can see beautiful rainbows in the water.

As we got closer to the creek the air began to buzz with flies and a certain smell began to attack our nostrils. Well, attack mine. I think to Jambo it was like the delicious odour of a barbecue on a weekend afternoon. I’ve seen dead cats in the creek before but never one that shows signs of having been trapped, killed and thrown off the Chinchen Street bridge. It was still partially bagged and in it’s deathly rictus. 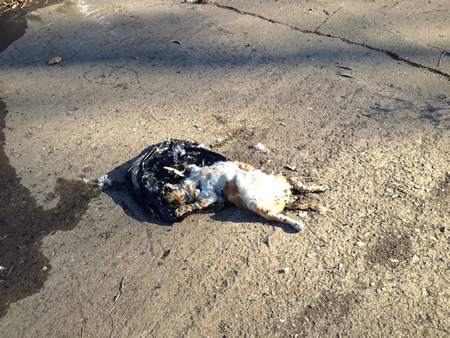 My nose was too sensitive to check whether there was a coin for the ferryman in pussy’s mouth. I’m guessing not, but last seen s/he seemed to be bobbing happily towards the Gates of Hell. Hamilton North style.

I’ve been looking to kick the new year off with something a bit different. It’s not that I haven’t been able to find any dead birds down the drain, oh no, there’s not shortage there. Or piles of litter, car-flattened blue-tongue lizards or discarded trollies. But I decided it was time to turn my attention to something that occasionally puzzles me or catches my attention. It’s those metal tags on telegraph poles.

Perhaps it’s my background in the world of sparks and wires but these things always catch my eye. I particularly like the ones on old, splintered poles, as though put there by early settlers. A kind of Hamilton North version of the Dig Tree.

What are they saying? At their simplest I suppose that they’re identifying a particular pole in a particular location, useful for directing workers to faults in the line or when replacing the poles.

Then there’s another layer of information. Maybe JU2 means “fed from Junction Box 2”. But what is the difference between HP and HR? Or just plain old H? 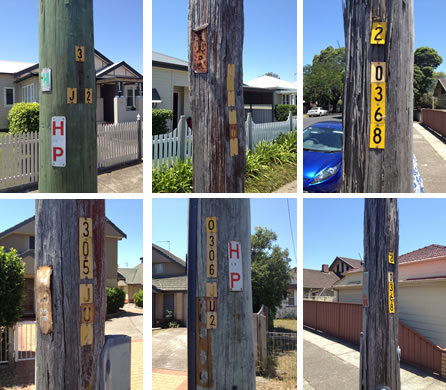 I could probably Google this and find out but there are some things in life that I’m quite happy not to know, and this is one of them. There’s something that’s almost omnipresent and leaden about the vast knowledge bank that is the Internet and it’s click-of-a-button offer to provide the answer to everything you’ve ever thought of ever. And so, on this subject at least, I shall remain deliberately and obstinately ignorant.

In the mean time I’ll give you a trolley. I know you’ll hate me if I don’t. 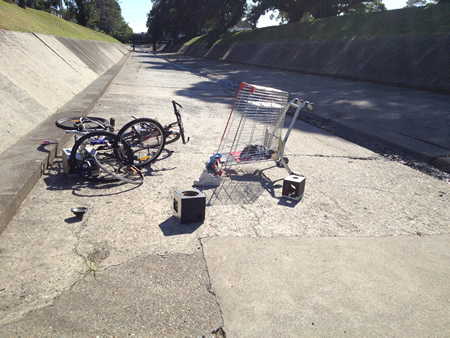