Twenty Twenty Visions is an exhibition running at Art Systems Wickham from 8 to 24 June 2020. Curated by Graham Wilson, the exhibition asks 20 Novocastrians – visual artists, architects, typographers, sculptors … and one writer – for their vision of Newcastle in the year 2020.

My entry took the form of an imaginary chapter of my book, published in 2021, called Ten Years Down the Drain: Walking in Styx Creek, 2010 to 2020. If you can’t make it to the exhibition then I’ve reproduced the text below. The words were typeset and illustrated by Christine Bruderlin, who also designed, typeset and illustrated the original book. 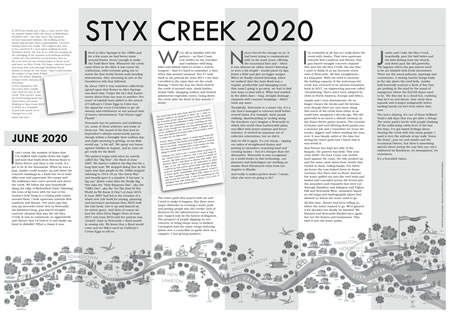 In 2010 my family got a dog, a cairn terrier that we named Jambo (after the Heart of Midlothian Football Club – the Jam Tarts, the Jambos). In time honoured fashion, the walking of the family dog became dad’s responsibility. I started writing about our walks. The original idea was to be a journal of a year spent walking around Hamilton North, the two of us, with me musing on the changing of the seasons and perhaps delving a little into the suburb’s social history. But as

the year went by my writing began to focus more and more on Styx Creek, the huge, concrete-lined waterway that cuts through Hamilton North. Known to locals as “the drain”, Styx Creek became the subject of my book A Year

I can’t count the number of times that I’ve walked with Jambo down the night- soil lane that leads from Boreas Road to Bates Street and then to the creek. It’s

got to be in the thousands. When he was a pup, Jambo could scarper up and down the concrete bankings in a flash but we’re both older now and appreciate the ramps and the walkways that curve around and above the creek. We follow the new boardwalk along the edge of Richardson Park, following the rows of fig trees with the last of the season’s fruit lying in a rotting pink carpet around them. I look upstream towards New Lambton and Kotara. Ten years ago this was my favourite worst view in Newcastle, the kilometre-long, gun–barrel-straight concrete channel that was the old Styx Creek. It was so unnatural, so aggressively anti-Nature that I’d look at it and shake my head in disbelief. What a vision it was.

I lived in Alice Springs in the 1980s and for a few years we had heavy rains around Easter, heavy enough to make the Todd River flow. Whenever the creek came down in the Alice it was cause for celebration, with everyone going out to watch the first frothy brown suds heading downstream, then swooning in awe at the thunderous tide that followed.

By about 1993 it was somehow collectively agreed upon that Easter in Alice Springs was flood time. Forget the fact that Easter moves about from one year to another; five years’ of rainfall stats added to the arrival of Cadbury’s Crème Eggs in Coles was the signal for every Centralian to get all swoony and celebratory at our annual time of watery awesomeness. Yay! Easter eggs! Floods!

Newcastle has its patterns and traditions too, some of them arbitrary and some of them not. The sound of the first koel in September’s always momentarily joyous, though within a fortnight their endless day- and-night meowing is getting, as my kids would say, “a bit old”. We spray our lawns against bindies in August, and in June we get ready for the flood.

The pattern began with what we naively called the “Big One”, the flood of June 2007. We haven’t called it the Big One for a long time now. We stopped doing that in the same way that people in the 1940s stopped referring to 1914–18 as “the Great War”

and wearily gave it a number. It became “a big one” (lower case) after the Really Big One (aka the “Holy Bejaysus One”, aka the “OMG One”, aka the “Its The End Of The World As We Know It One”) of June 2015. If June 2007 had led to the creation of a whole new rule book for zoning, planning and insurance premiums then 2015 took the rule book, tore it up and danced on

its watery grave. And then of course we had the other Even Bigger Ones of June 2017 and June 2019 and the pattern was created: June in Newcastle = flood month in swamp city. We knew that a flood would come and we didn’t need no Cadbury’s Crème Eggs to tell us.

We’re all so familiar with the patter – an east Coast Low settles on the coastline and combines with king tides and inland rains to create a watery tempest – that it’s hard to remember a time when this seemed unusual. But if I look back at my journal for June 2011 I see that I revelled in the rains that set the creek flowing. I loved the way the flood cleared the creek of aerosol cans, drink bottles, tennis balls, shopping trolleys and busted polystyrene vegetable crates. Going down the creek after the flood of that month, I wrote:

The world felt fresh and clean and the creek looked chipper without its garland of litter. As I came to the junction of the canal and Styx Creek, the point where it bends into Throsby Creek, I saw something move that was unfamiliar. It was standing on the edge of the trough but the sun was shining low and acute making the wet concrete glare. I shaded my eyes and distracted Jambo with a treat while I tried to make out its silhouette.

A bird: short, stocky, squat. It stood apart from the herons and ibis, the ducks and magpie larks. In pro- file it was dark, charcoal grey, but when it turned the sun caught its flank and I could make out dappling in tawny and chestnut. It was a bittern.

Perhaps you have to be a certain kind of person to get excited about a bittern, but I am that kind of person. My kids aren’t: neither showed a flicker of interest when I told them at dinner that night. But I like to see the bittern as an indication of what could be for this rotten, petrol-fume infested, slimy- concrete banked thing that people call “the drain”. A water park: boardwalks and pathways connecting New Lambton with Tighes Hill, hides to sit in and watch the bird life, a way of reminding us city dwellers that this thing isn’t a drain, it’s a river. It always was and always will be.

The water park idea stayed with me and I tried to make it happen. But there were major obstacles to creating a water park and getting people into the creeks: lack of finances for the infrastructure was a big one, topped only by the horror of litigation. The prospect of people slipping on wet concrete or being swept away to darkest Carrington had the same cringe-inducing power over a councillor as garlic does on a vampire. I was getting nowhere.

Nature forced the change on us. It had been trying to communicate with us for some years, offering the occasional hint and – when it was obvious we either weren’t listening or were a bit stupid – would purse its lips, frown a little and give us bigger nudges. When we finally started listening, when we realised that the June flood was a regular, predictable and damaging event that wasn’t going to go away, we had to find new ways to deal with it. What had worked in the olden days – long, straight drainage channels with concrete bankings – didn’t work any more.

Thankfully, Newcastle is a smart city. It’s a city that’s managed to reinvent itself before, several times. For example, most people walking, skateboarding or cycling along

the foreshore can’t imagine a Newcastle in which this world-class harbourside plaza was filled with power stations and heavy industry. It needed an immense act of collective reinvention, but we did it.

And we did it again. It’s not cheap – ripping out miles of straightened drains and putting in meanders; acquiring land and creating basins – but it’s cheaper than the alternative. Newcastle is now recognised as a world leader in this technology, our planners and hydrologers are working on similar flood-threatened cities from Los Angeles to Manila.

And really it makes perfect sense. I mean, what else were we going to do?

I’m reminded of all this as I walk down the creek with Jambo. That view upstream towards New Lambton and Kotara, that gun–barrel-straight concrete channel that was the old Styx Creek, the one that I used to think of as my favourite worst view of Newcastle. All that straightness – it’s long gone. With the need to increase the holding capacity of the waterways the creek was returned to its ancient formation back in 2017, an engineering process called “meandering” that’s since been adopted by cities in North America, Europe and Africa.

Jambo and I turn downstream. He no longer chases the ducks and the herons, even though there are now more along this reach of the creek than either of us could have imagined a decade ago. The old gasworks is as much a distant memory as the Zaara Street power station. The creation of basins and reed-filtering flood ponds was a monster job and I remember for years the trucks, diggers and rollers working the area over. It was bloody awful at the time but seeing the water park now I know that it was worth it.

And Nature has kept her side of the bargain, the pattern has held. This year, June 2020, the East Coast Low settled hard against the coast, the tide pushed up and the rains came down from clouds that circled in thick, roiling banks. For thirty- six hours the rain lashed down in dense curtains. But there was no flood. Instead, the water spilled out into the reed beds and basins and cascaded across the levees into the meanders and channels that were cut through Hamilton and Islington and Tighes Hill and Newcastle West, meanders based on old maps and hydrographic plans that showed us where the water used to go.

All this time, Nature had been telling us where the water wanted to go. We’d ignored it for decades but finally we listened. We listened and Newcastle flooded once again, but not the homes and businesses. This time it was the water parks.

Jambo and I take the Styx Creek boardwalk, past the bird hides and the kids fishing from the wharfs, and down past the old gasworks. The lagoons where the gas meters used to be are brimful with fresh stormwater. There are the usual pelicans, lapwings and cormorants. A swamp harrier hangs lazily in the sky above the reed beds. Jambo half-heartedly scatters a flock of ibis that are probing in the mud by the stand of mangroves where the ELGAS depot used to be. The ibis rise in a cloud but, realising that he’s no real threat, they circle then squawk and trumpet indignantly before landing barely ten feet from where they rose.

The sun’s shining. It’s one of those brilliant, Noah’s Ark days that you get after a deluge. The water park’s hectic with people shaking off the suffocating cabin fever of the last few days. I’ve got mixed feelings about sharing the creek with this many people; I used to love the solitude of my walk “down the drain”, just me and Jambo and the occasional bittern, but there’s something special about seeing the way that our city’s embraced its floodiness, its swampiness, its wateriness.