Hamilton North is charmed. Not only does it have the broad playing fields of Smith Park and the smaller fig-tree lined Richardson Park, it also has several untended areas (the gasworks and the land around the rail lines) and numerous waterways. The result is a mixture of wildlife habitats, particularly for the small insectivorous birds such as wrens, silvereye, thornbills and fantails, birds that have been pushed to the margins by our endless “tidying up” of gardens and country, thereby denying these tiny gems of the tangled undergrowth that they rely on.

Critical to the success of these habitats is the major corridor of Styx Creek, which cuts through Hamilton North, starting on our border with Islington and finishing up at New Lambton. No one who lives in Hamilton North can fail to notice it, whether it’s a trickling stream … 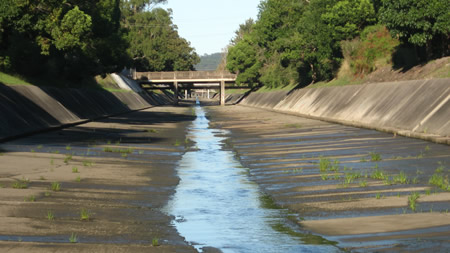 or a raging torrent. 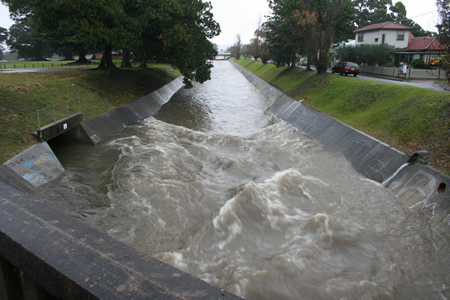 It’s natural for us to want to be close to water; I’d go so far as to say that it’s in our genes. But as our villages have grown into towns and our towns into cities we’ve had to change the way we manage our water. (The story of how our creeks and channels became concrete-lined drains is told in the book Pipelines and People; Stockton Library has a copy if you’re interested.)

But somewhere along the way, on our journey from informal, collective interaction with our environment to its management by government bureaucracies, a disconnect occurred. These waterways are now “managed” by councils and Water Boards, the bankings have been concreted and we, the people who live around them, deterred from interacting with them. It is, in fact, illegal to enter them. Yes, read that again: it is illegal.

I’m not going to go into why this is the case; let me just dangle the word “liability” before your eyes and let your imagination fill in the gaps. However, suffice it to say that any person who enters a waterway not only exposes themselves to the possibility of prosecution but also does so at their own risk.

Me, I’m a crazy libertarian risk taker. Maybe you are too. Might see you down there.