I grew up in the country, in England. I played outside all the time, in the fields and the woods and the shore, and the best times were spent in, as Australians call it, the bush. I was interested in all the things around me – trees and rocks and frogs and hares and foxes – but my main interest was in birds.

I collected birds eggs. These days in Britain the RSPB has got bird-nesting into a place in the public imagination somewhere between fox hunting and live veal exports but there was a time when bird-nesting was seen as a normal way for a lad to learn about nature. Where do owls nest? Curlews? Corncrakes? I loved the nesting season and didn’t see any conflict between my collecting birds eggs and being a member of the Young Ornithologists Club, the kids’ version of the RSPB proper. My dad made a tray with sides about two inches high and filled it with sawdust and I set each egg so that it nestled into the sawdust as comfortably as it had in the nest, before I got my hands on it, pricked a hole in either end and blew the yolk out.

I’ve written elsewhere about having to come to terms with Australia’s birds. They’re on a continental scale and everything’s so much BIGGER over here. In Britain you learn to identify a wren; Australian bird books have pages and pages of wrens. Ditto robins, and any number of other LBBs (little brown birds). So when I found this egg at the end of the driveway I was stumped. 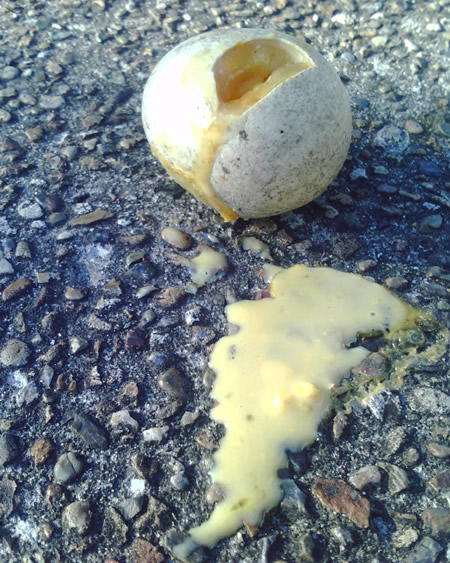 I think it might be a magpie’s egg. (If you look around the Net most are shown as blue with mottling, though the Museum of Victoria has a collection of 4,200 eggs donated to it in 1927, including an entire tray of magpie eggs in a cabinet) They nest over in the fig trees in Richardson Park; at the moment it’s cuckoo season and the channel-billed cuckoos predate on the magpies and crows. My guess is it’s been taken by a cuckoo, punctured and dropped away from the scene of  the crime.

This entry was posted on Friday, October 21st, 2011 at 8:22 pm and is filed under Found things, Round things. You can follow any responses to this entry through the RSS 2.0 feed. You can leave a response, or trackback from your own site.

One Response to Egg