It’s amazing how different the walk down the creek is when the tide is low. It doesn’t look very low in this picture but I can assure you it is; it’s just that the creek bed is so clagged up with fallen leaves that the water has trouble draining away and ponds around the beck.

At the lowest tide you can cross the creek as far downstream as the TAFE, if you don’t mind having your feet blackened with mangrove mud. 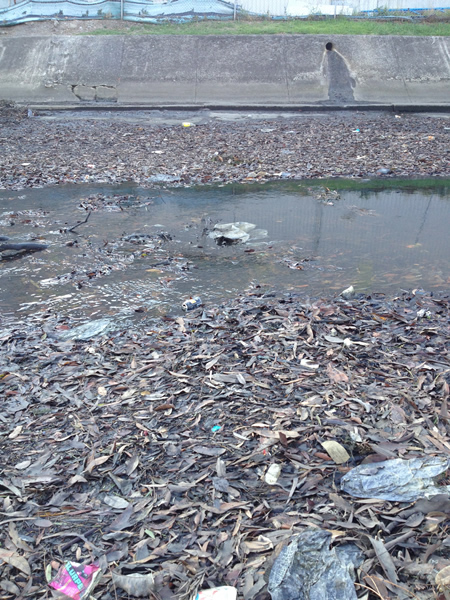 Several man-made reefs have appeared that I didn’t know existed. They may just be old shopping trollies, but I’m sure they fulfil the same function.

Hey, do those gable ends look faces? Someone should get Trevor Dickinson to draw them, he likes faces on buildings.

The weekend before last I walked the whole way down to Throsby Creek with Jambo, right down to the dog park at Tighes Hill. 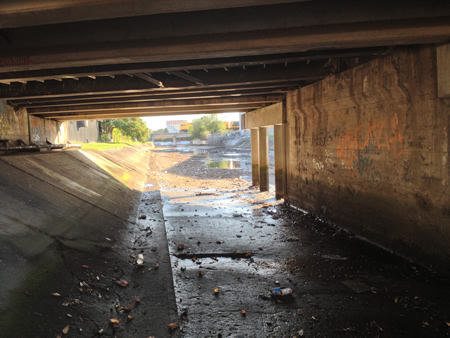 There’s some work going on by the car scrapper. I don’t know what they’re doing but I do know one thing: that is the most rubbish silt fence I’ve ever seen. Banging in a few star pickets and stretching a bit of shade cloth does not a silt fence make. 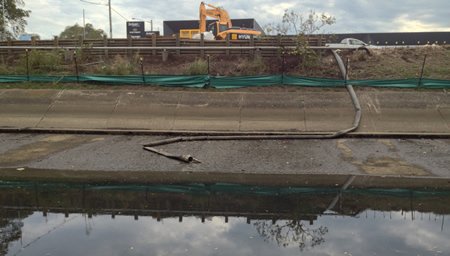 The bridge pillars beneath the Maitland Road crossing are covered in oyster shells, something I’d never noticed before.

I know almost every ancient footprint in the concrete of the creek bed, footprints that belong to people who are now in their dotage, if they’re alive at all. But something else that I hadn’t noticed before was this sad face, a bit like a Harry Potter dementor.

They’re still jack-hammering up the concrete banking at Throsby and replacing it with rock revetments; this section is quite close to Maitland Road. How far round are they going with this? I’ll bet they stop at the Styx.

And so, after the lowest tides we’ve seen in a while, it seems logical that we should have some of the highest. Is it logical though? I really don’t know much about tides, other than some half-understood “knowledge” about the moon and gravity.

I was talking to someone recently who told me that when there are high tides on one side of the earth there are not, as you might expect, low tides on the antipodes. Rather, high tides and low tides appear in equal and opposite measure. It was all to do with forces, of which gravity is but one. That really made my head hurt.

This week has seen high tides pushing all the way upstream, almost beyond Chatham Road bridge. The high tides, the recent rains that have flushed away the litter, the crystal clear skies and the work by Dave and the maintenance guys has combined to make the creek a spectacular place to be. Early mornings are utterly gorgeous: the edges are teeming with waterbirds, the shrubs alive with insectivores and honeyeaters, the water boiling with leaping fish. 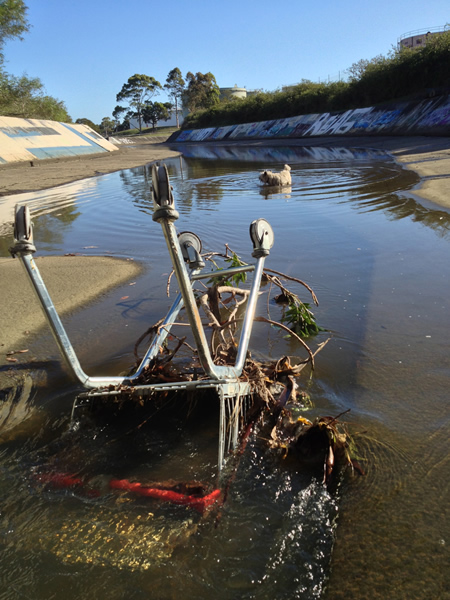 The gasworks is jumping with rabbits at the moment. I came across my first dead one in the creek, which was a surprise. What happened? Dog? Disease? Avian predator? It was too big for the resident black-shouldered kites, kestrels, grey goshawks or even brown falcons. The swamp harrier’s been back, lolloping along at treetop height with its huge wingbeats, occasionally dropping, swooping and banking. It reminds of a German bomber, endlessly mobbed by Indian myna Spitfires. 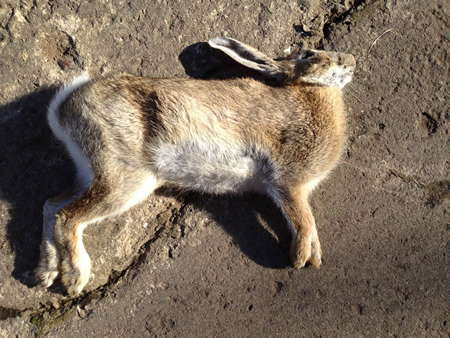 Do yourself a favour: get up early tomorrow and go for a walk down your local creek. You just don’t know what you might find.