That’s me at the moment, in spite of my bung leg, Christmas deadlines and the looming fiscal cliff that’s so troubling the US. And it’s impossible not to be happy when you see a big yellow smiley face. Impossible.

The recent rains weren’t as heavy as predicted. Steady rains are much better for the garden but don’t create great flushes in the creek; rather, there’s a steady build up followed by a steady fall. The litter just bumps up against the boom at the TAFE, so this is a good thing: at least it’s there to get collected. But when the rain has gone away, and the water level’s fallen, and the wind changes, we’re left once again with an ugly mess. 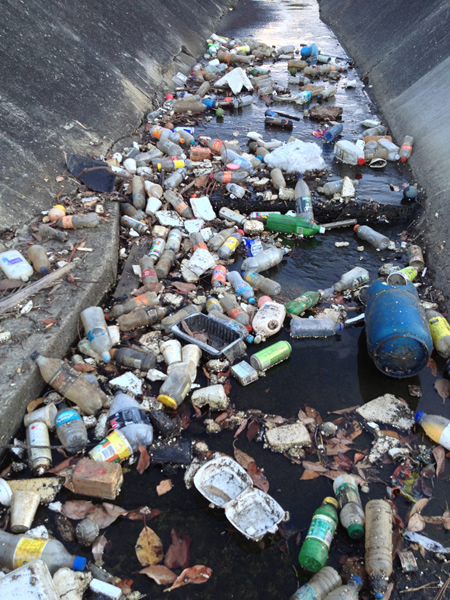 The steady flow has created lots of beautiful patterns from the leaves, sticks, jacaranda blossom and other debris that gathers on the creek bed. I never tire of the gentle curves and arcs that they form and continually photograph them. Thank God I’m not paying for film development.

These she-oak leaves collect next to Bates Street and tangle together to create an interlocking raft.

A colourful pile of fabric caught my eye and I thought it was yet another recruit to the Legion of Lost Children’s Toys but, when I stooped to photograph it, I realised it was a dead rainbow lorikeet.

I never think of these pretty birds as ever being dead. There job is to fly around looking gorgeous and adding sparkle to the skies. If ever thought about life after sparkly flight for these guys (which I never had) then I would imagine that they’d be carried off by a warm zephyr to a place in the clouds full of nectar and ambrosia.

But that’s the drain: always throwing reality back in my face. The pile of DVD cases under the Chatham Road bridge was continuing to grow and there was this right shifty-looking geezer there the other day, though he quickly scrambled up the banking as I walked upstream from the gasworks. Since then it’s stopped. Either Jambo and I have scared him away from a life of crime or he’s chosen to dump his loot elsewhere.

I saw two trains that had stopped for a chat, one empty and vandalised and off to the sheds for a bit of train pampering (or perhaps “pimping” would be more trainy, masculine and contemporary – if ugly) while the other was was all clean and full of people. I don’t know why it should tickle me but tickle me it did. What were they saying to each other?

Ooh. I just had a thought: maybe it was the drivers who were talking, not the trains. I really should rein my imagination in a bit!

After this walk I went back through Ham North rather than back up the drain. On the way I passed the old Gas & Coke building. A lot of people having been going in there lately for a look round as the back doors have been busted open. Frankly I’m all for this, but not every visitor is in there to admire the pressed metal ceilings or grieve over the way this architectural landmark is being run down. There are kids who go in there simply to trash something, and this worries me. The roof is showing signs of going and now some of the windows have been broken. If water gets in – when water gets in – some of the processes of decay will be irreversible.

I’ve emailed Jemena again about this building, but still no reply. I’ve sent them the link to Renew Newcastle’s excellent promotional video on the ways in which they’ve repurposed some of the city’s empty commercial spaces (as featured on SBS News the other day). But no reply.

And that makes me NOT HAPPY.