There are things that appear in the creek that signal that turn of the season. The other day I watched as a team of men dragged a stolen motorbike out of the muddy pond by the TAFE. Stolen motorbikes and summer just go hand in hand, don’t they?

I’m not kidding, it was a full-size genuine motorbike, not a little jobby like this one! 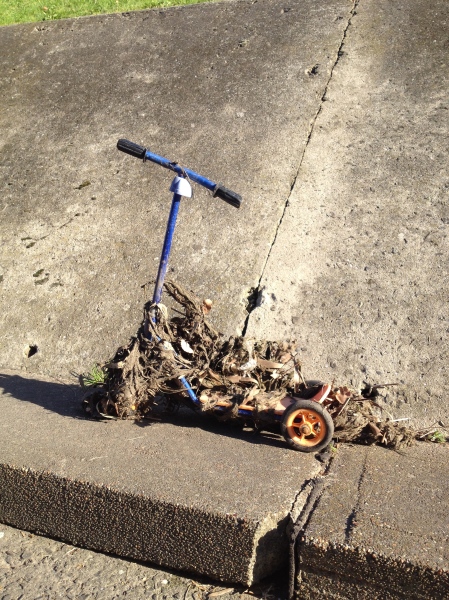 They were still at it next day with their nets and various bits of tackle. How many stolen or dumped vehicle parts can they fit in that wee pond?

Of course the real changes I’ve been looking for take place in the skies. I’ve been hearing koels and figbirds for a few weeks, but where oh where have the channel-billed cuckoos been? Today I finally heard the telltale squawk of a flock of angry myna birds as they mobbed some big and unwelcome guest, then I saw the familiar dipping, swooping flight pattern, and then the unmistakeable croaking rasp. They’re here!

Just in time to get the second clutch of eggs for birds like this white-faced heron, which I spotted down the night-soil lane. He was such a gangly teenager, covered in bum-fluff and dwarfing his poor mother.

Report to come soon a site visit to the gasworks; just waiting for photo clearance from Jemena.