And it’s goodnight from him

Five years ago, in April 2016, I closed the Hamilton North blog. I moved to Lightning Ridge, but Jambo – my trusty drain companion and the real star of my book – stayed in Newcastle. Eventually he moved to Canberra where, sadly, he died, almost five years to the day, in April 2021. Even though I no longer post here I’ve had many messages via the blog asking about him. He was a lovely dog, totally special, and he’s very sadly missed. I think that he lives on, in the pages of A Year Down the Drain and in the Hamilton North blog. Yaluu, maadhaay gaba. [ORIGINAL POST APRIL 2016] Last post for a while, as I’m off to Lightning Ridge. There’ll be a new blog, and I’ll put a redirect in when it starts. Till then, goodbye from me. And goodbye from him. 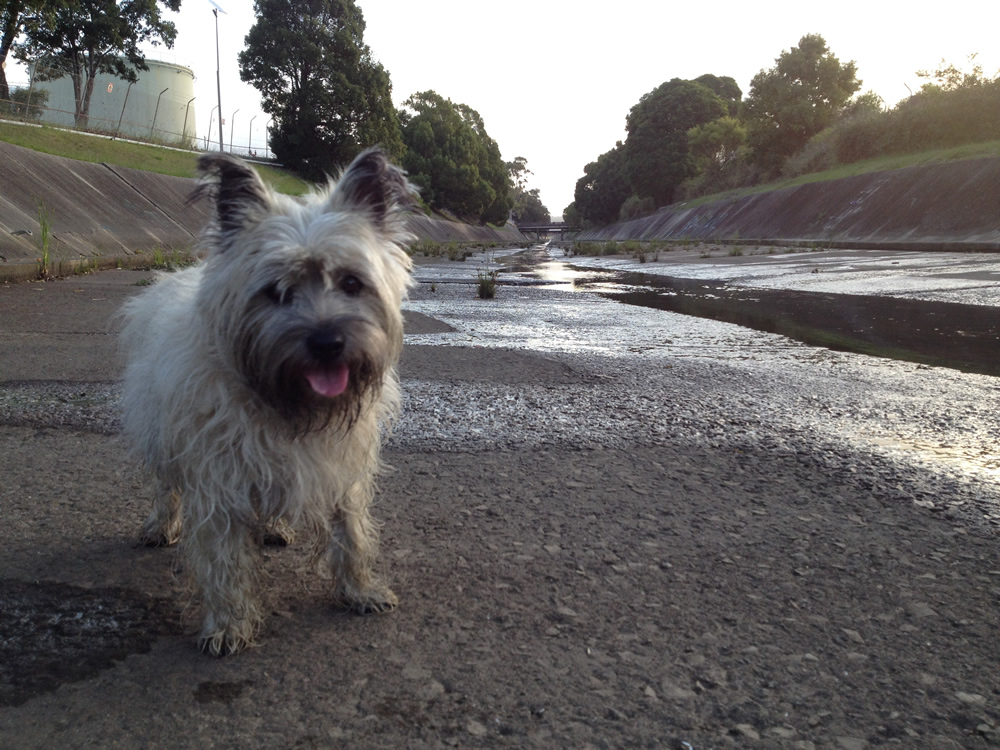 But, if you’re desperate, you can find my new blog here.

The quality of light

I’ve never really understood the difference between ordinary trains and Country Link trains. I do know a few things: 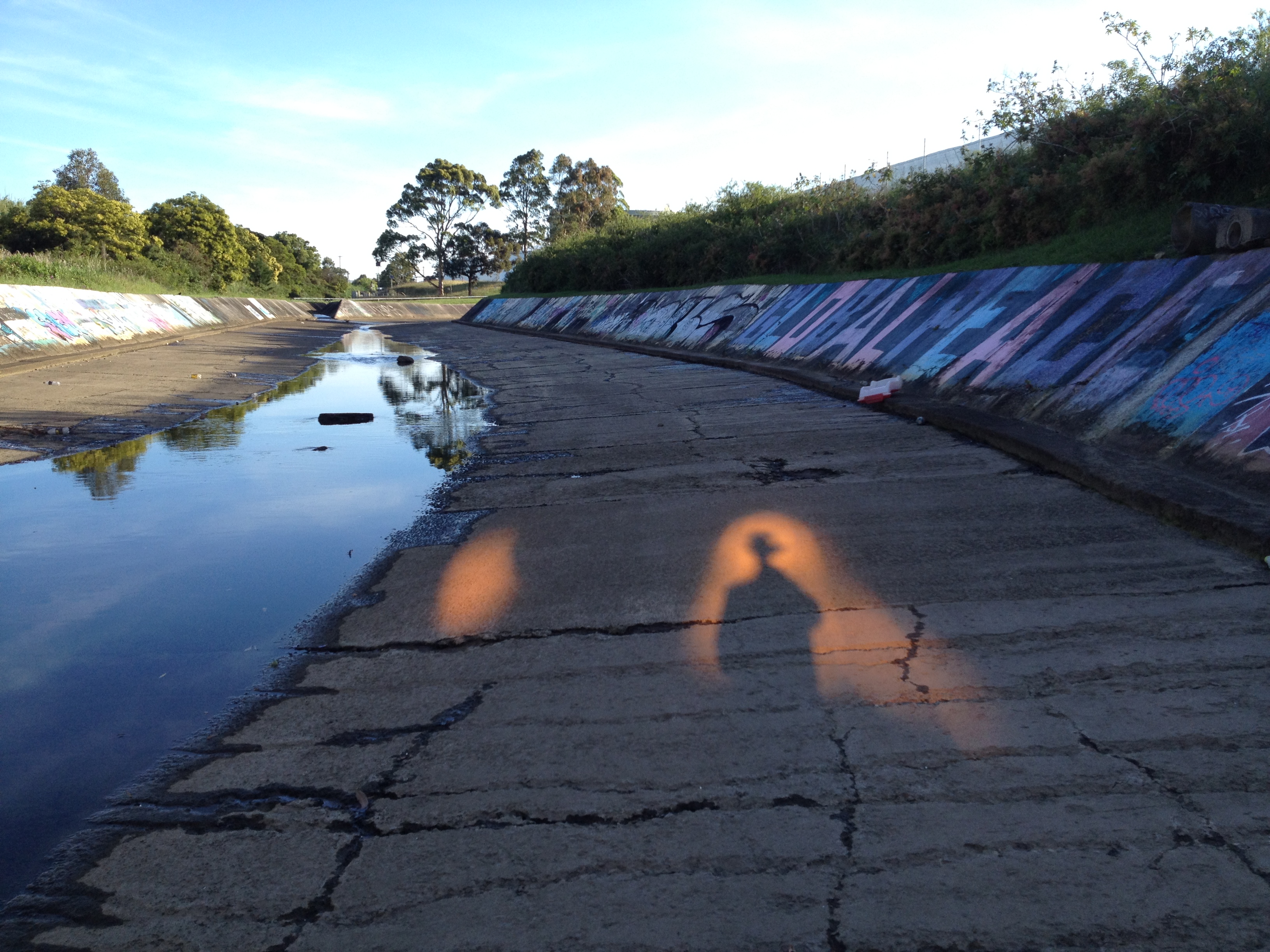 The quality of light

This morning, a huge, raucous flock of sulphur-crested cockatoos filled the sky around Richardson Park. They’d actually been quietly tearing up the turf on the creek bank next to Bates Street until a certain excitable cairn terrier spotted them. After they’d wheeled a lap of the park they settled on the electric wires, hung upside down and generally teased him, which is what he deserved. 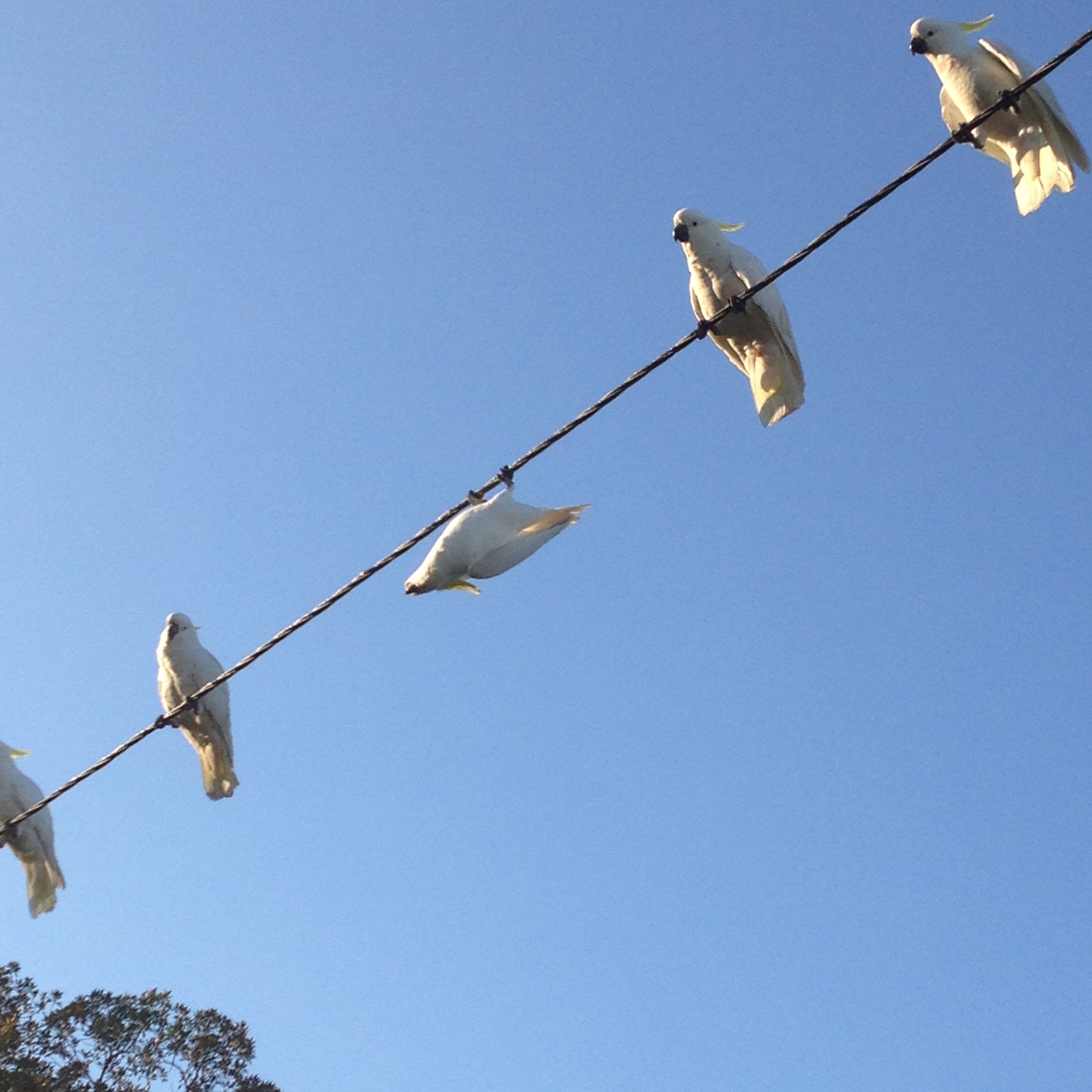 The light in the morning is kind of the same all year round; I could have taken this photo of these cockies in July or January. But afternoon light in winter is different. It has a quality that evokes something in me, something that makes me in equal parts nostalgic, sentimental, morose and the nice-kind-of sad. Perhaps it’s the reminder that the season of cold and dark is upon us and that this, deep down, reminds us of time’s relentless passing and thereby our own mortality.

Jambo would probably scoff at all this philosophising. 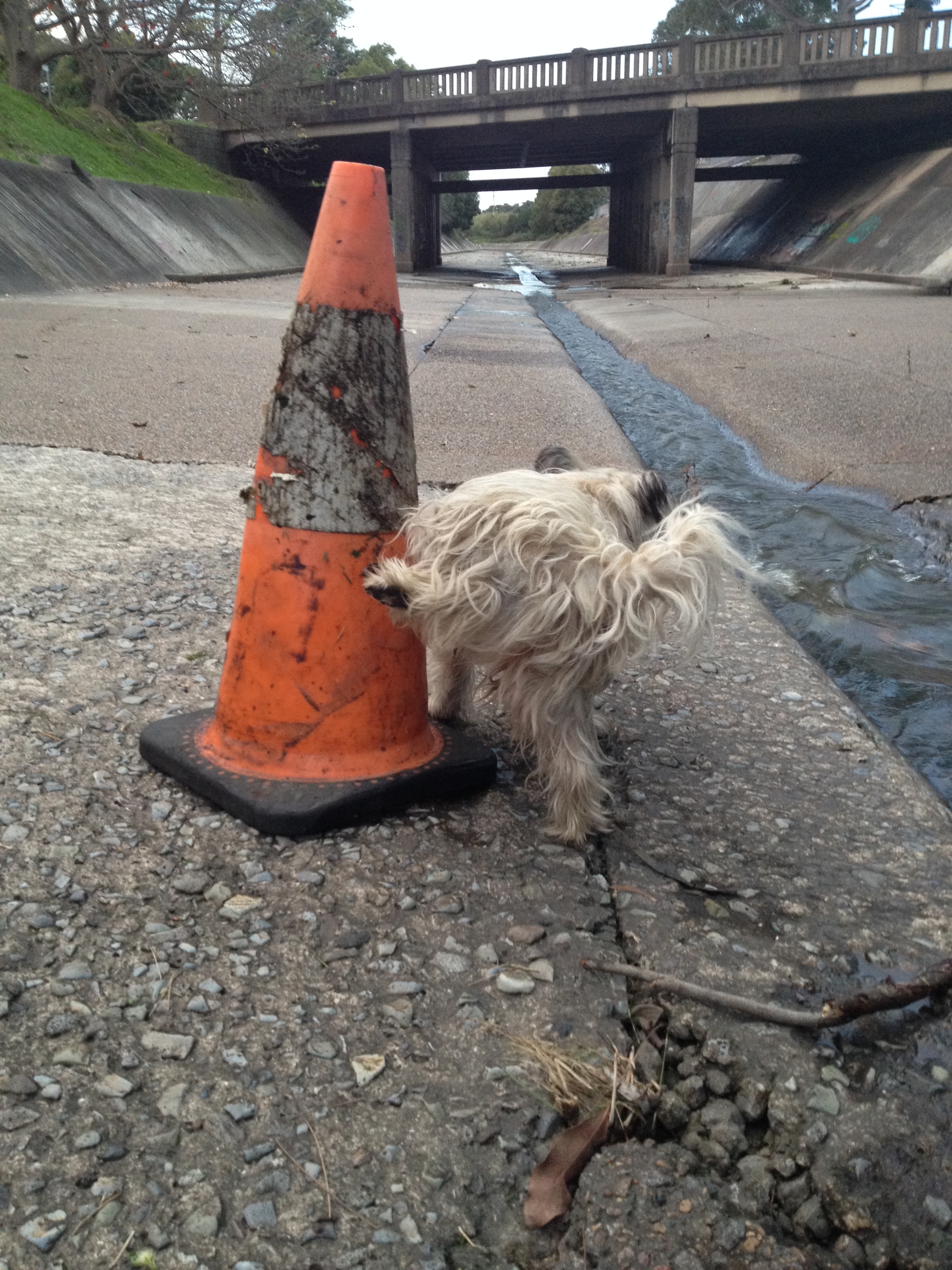 I know that smell has been shown to initiate memory retrieval. I’ve experienced it myself: the specific combination of metal being burnt or machined, mixed with industrial lubricant and metal grime (which I occasionally get as I pass the little engineering place on Clyde Street) immediately puts me back in the shipyard where I did my apprenticeship.

I think the quality of light can do this too. The winter light in the creek may be enhanced by the mournful clanging of the bell by the Clyde Street lights, or the down-thrust of a plane as it begins its descent into Williamtown. The sounds of vehicles (particularly trains and planes) going someplace else has always evoked that nostalgia/sentimentality in me. I was thinking that it might have something to do with “other lives going places” or “a sense of life passing me by” but I clearly remember having the same feeling when I was a small child, lying in my bed and hearing the two-car rattler heading over the Foxfield viaduct and onwards up the Cumbrian coast. 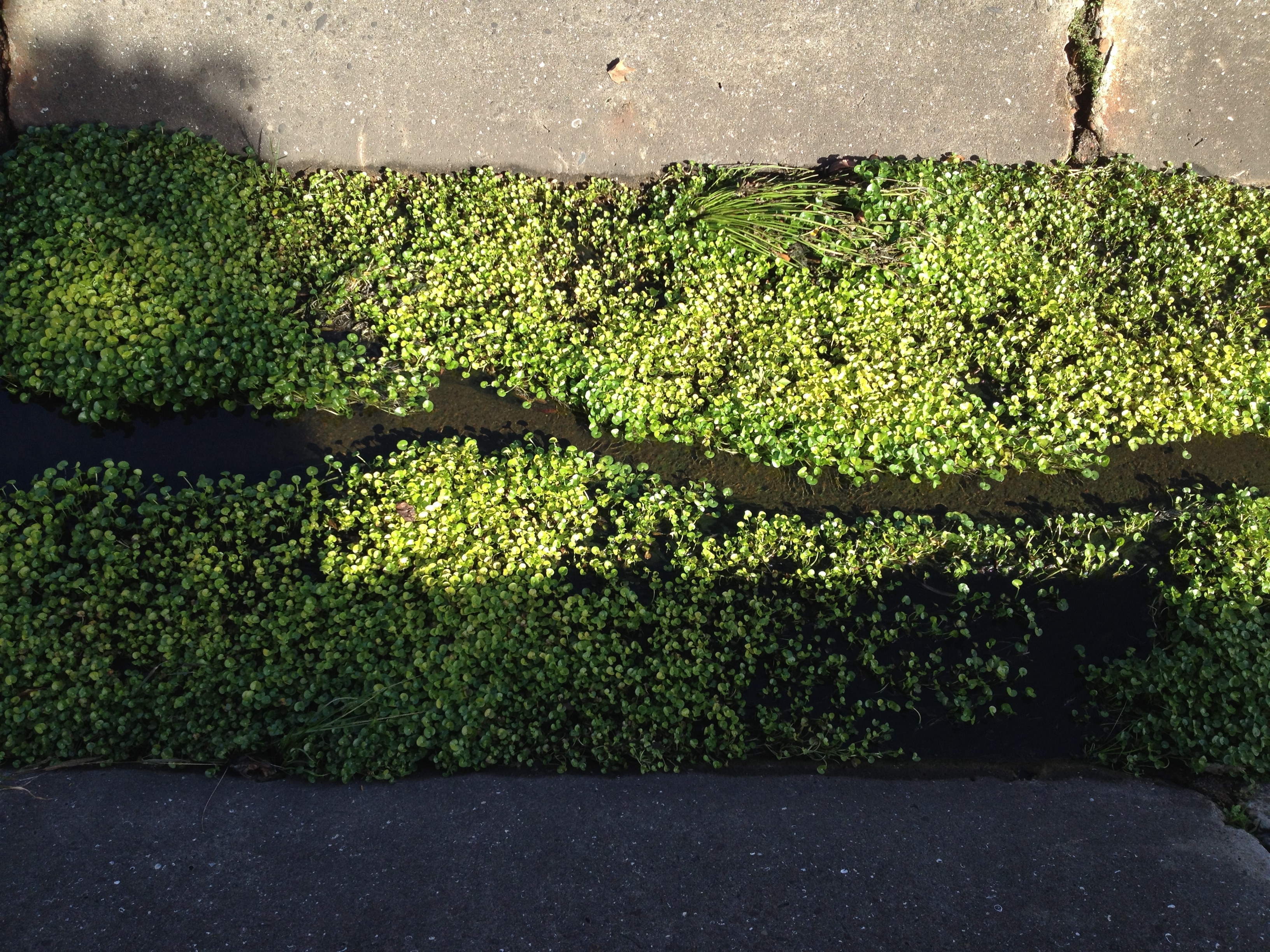 I’ve been trying to capture this light, but an iPhone really isn’t the tool for the job. 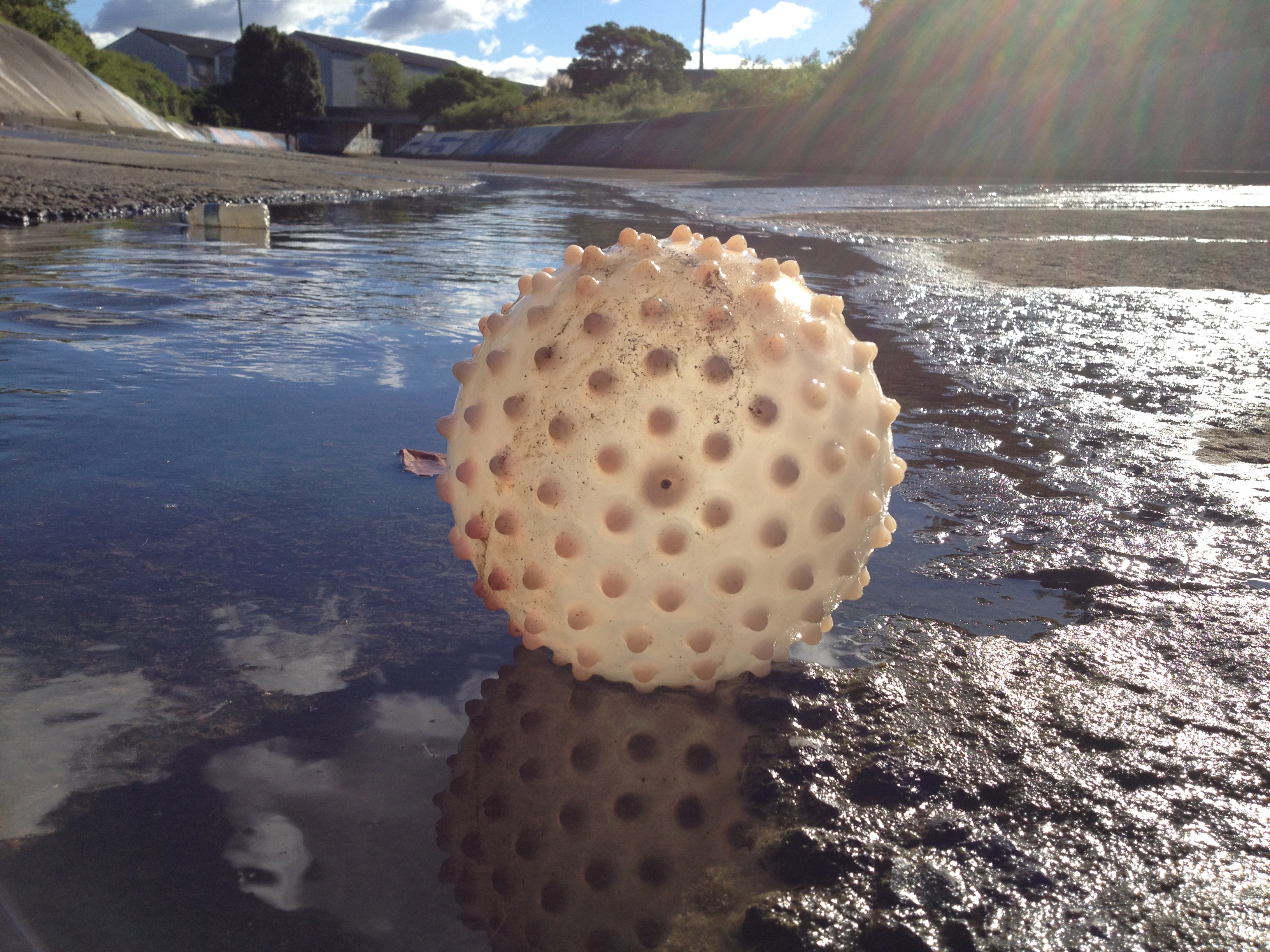 It can sometimes surprise me, my phone. I didn’t expect this iridescent bougainvillaea petal to look as hot and alive and vibrant on the screen as it did in the creek, but it does. 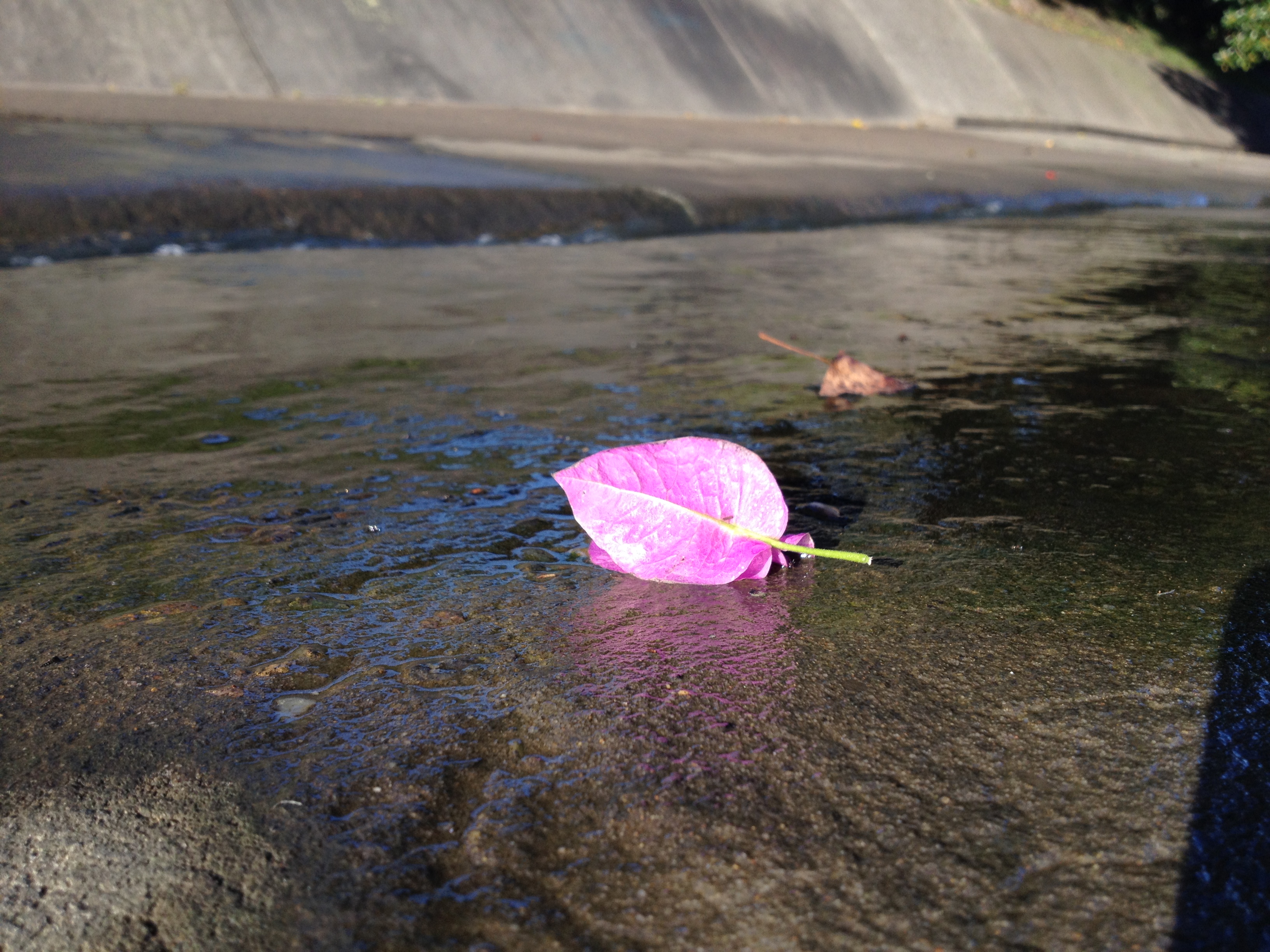 The maudlin times are upon me. Evening light, distant bells, trains and planes. The nice kind of sad.

I seem to remember that “barbecue stopper” was a phrase coined, or at least popularised, during the Howard government; the kind of topic that the hollow men tested on focus groups to gauge the reaction of carefully selected representatives of Everyday Australia. I reckon the two words “bad mother” would not just stop a barbecue but kill it faster than slapping someone else’s child. Just type “bad mother” and “feminist theory” into Google and see how many quatrillion hits you get hit by.

Perhaps its because of the hegemony of my unreconstructed phallocentricity that the phrase popped into my head the other morning (I’d like to kid myself that it popped in there ironically, but, well …). I’d just come under the railway bridge as the four-carriage train from Dungog sped overhead when Jambo spotted Mother Duck (from my previous post) and her clutch, now reduced to four ducklings. The tide was low but there was still plenty of deepish water pooled up from the litter boom by the TAFE. But did she gather her offspring and swim away towards the tidal pool as a good mother should? No. She ran out of the water and waddled along the concrete making bewildered noises. Of course, her ducklings came squeaking pathetically behind her. 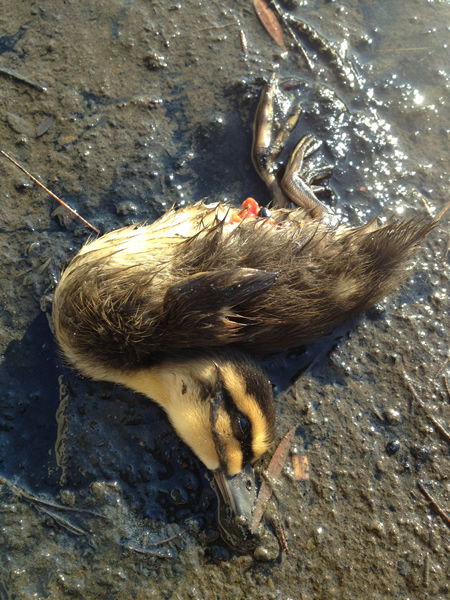 Jambo’s chased ducks before, and ducklings. On one occasion he caught a few, carried them around in his mouth and put them down, at which point the still living ducklings lay, stunned, for a few seconds for racing into the water. Not this time. This is the first time he’s actually caught and killed one. I’m hoping it was an accident.

I was baffled by Mother Duck’s behaviour. Surely the obvious thing to do was to head for deep water. And she barely even bothered with the old “ooh I’ve heart my wing – chase me instead” routine. So the other day she’d been wantonly larking around miles from cover upstream, being stalked by two ravens. And now this. No wonder she only had four ducklings left. Ok, three.

But I need to be careful at this point. It’s not a huge leap from judging the maternal instincts of a duck to developing  Malthusian theories on the virtues of public housing. The fact is, Nature just gets on with it. Unless you’re at the top of the food chain then you’re fodder for something else. The creek’s littered with dead babies, such as this gorgeous blue skink. 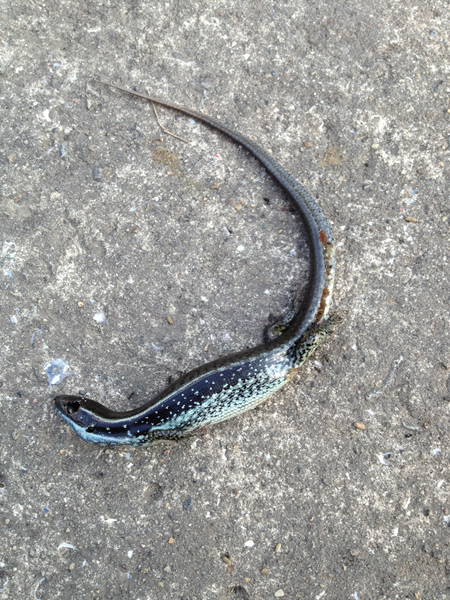 This young myna was still limp and must have died only moments before I came across it. 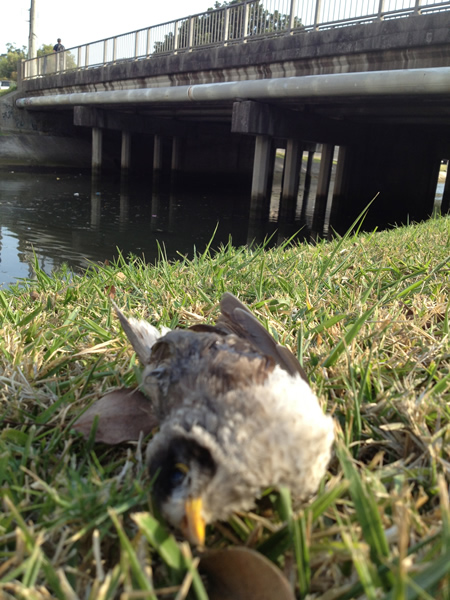 And this blue-tongue, barely more than eight inches long. 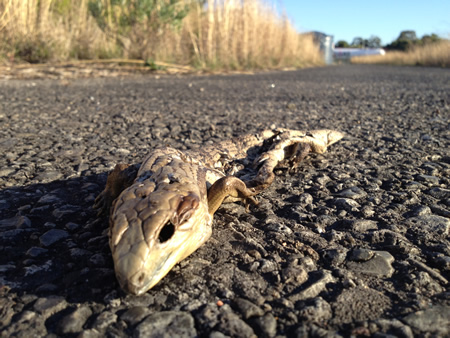 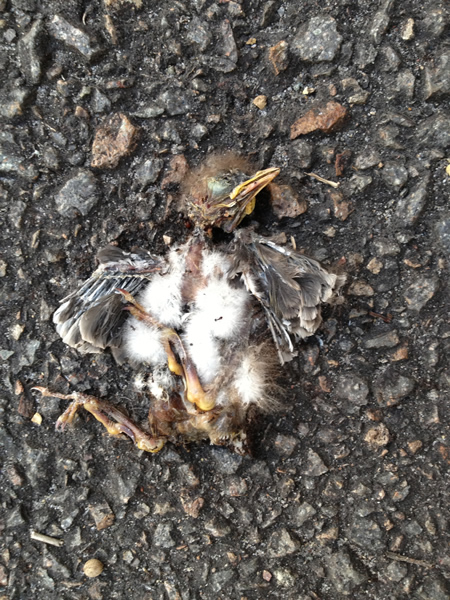 Of course, for every “bad mother” there’s the feckless owner of an ill-disciplined cairn terrier. But would that stop a barbecue? I’ll take it to my focus group.

It’s only when I look at the photos in the folder on my desktop (the “Holding pen”) that themes emerge. This week the theme has been “Jambo pondering stuff”.

I have to say that “Jambo pondering XXXX” makes a picture more interesting. Take, for example, this dumped piece of electronic equipment: 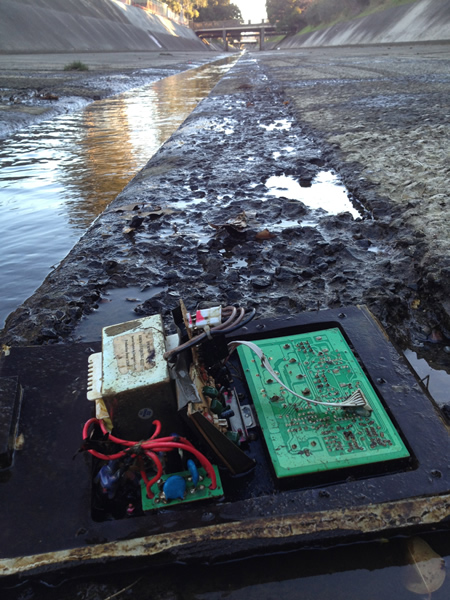 It’s intriguing. I ask myself: “How did it get there? What is it off? Why was it dumped?” But a thing with Jambo pondering it is somehow more …  Jambo-ish. What is going on in that tiny, peanut-sized brain of his? 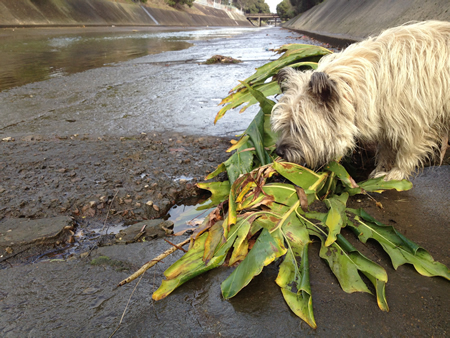 This toy metal horse. “How?” he wonders. “Why? Is it old? An antique? Where’s the knight or cowboy that belongs to it? Is someone looking for it? Was it lost by children playing in the creek fifty years ago and only now dislodged and washed downstream?” These are the questions Jambo asks himself. 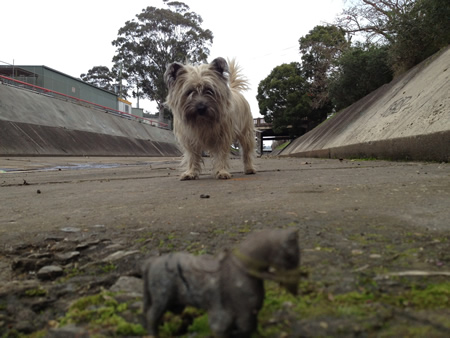 “This packet of My Dog: it is empty? Why? Who got there before me? Why does that dog on the packet look like me, but whiter? Why are all dogs whiter than me, even black dogs? Do I need a bath? Am I alone in the universe? Is it dinnertime yet?” 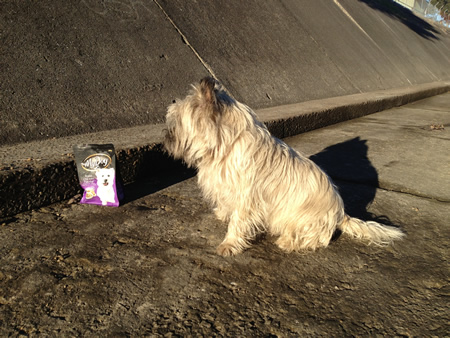 So many questions. Poor Jambo.

God, Nature is so literal. Last week it was autumn, season of mists and mellow fruitfulness, and everything was just lovely. Clear skies, warm sun and cheerful birdies like this one looking down at me from the parapet of the Chatham Road bridge. 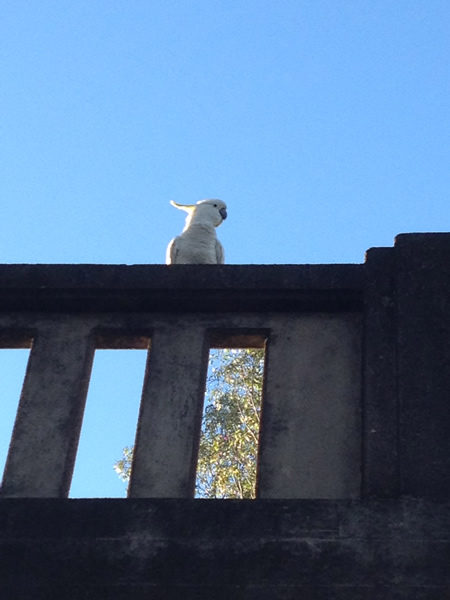 The clean-up guys were doing a stirling job, scooping rubbish out of the creek by the TAFE. 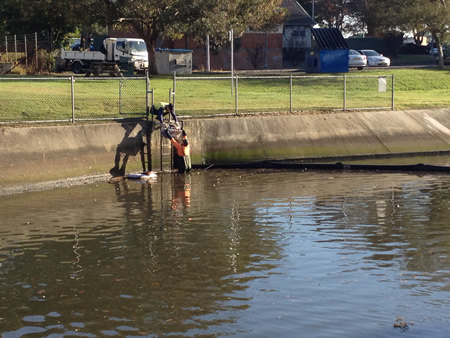 There’s so much of it. It really never ends. 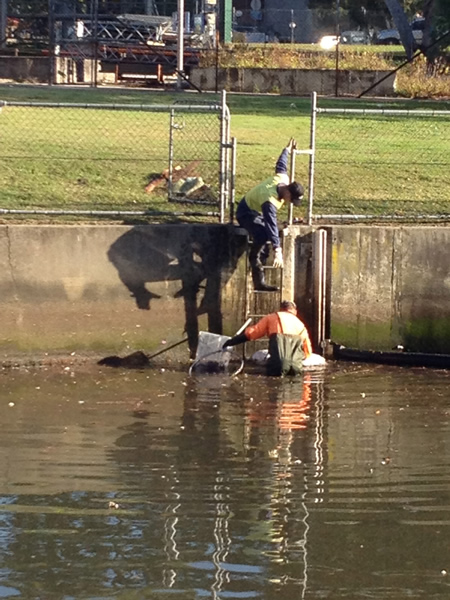 Then the weekend came, and with it winter. It was like a switch being turned off. Or on. The temperature dropped by ten degrees and the rain came tumbling down. The creek was full so I had to find alternative walks for Jambo. One that we tend to do when it’s really wet is to do a circuit of the TAFE college, around the football oval and back to the creek by Maitland Road. The Styx was full and dark and oily and very, very unwelcoming. 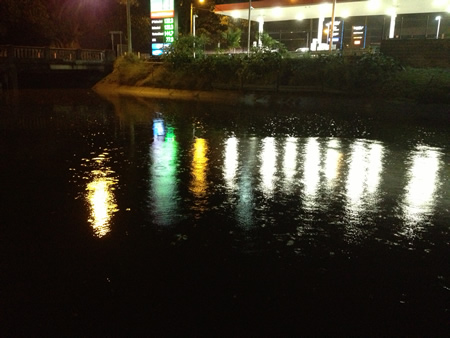 On the way back home it started it belting down. And what else would happen on a freezing cold first-day-of-winter’s night with the rain coming down like stair-rods? Of course, a coal train lumbers along just as I get to the lights. And then STOPS! 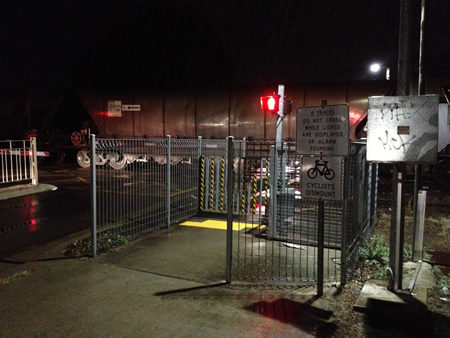 That was the longest seven and a half minutes of my life. I’m still drying out.

Bumped into Dave and the boys down the creek the other day. I wanted to get a nice flashy pic of his ute barrelling up through the beck and sending water spraying out from the wheel arches but it takes time to realise the moment, get the phone out, enter password, open camera … oh. The moment’s gone. And then Dave pulls up and tries to charge ten bucks for the privilege! Bah! 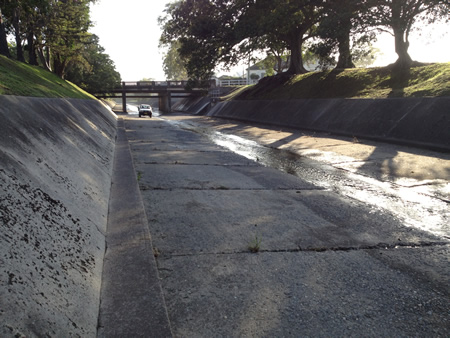 They’re not the only ones doing “improvements”. The other week, as I rounded the creek and got the full disaster of the Styx in my sights – a mile and more of pure straightness, just as Nature never intended – I saw a couple of hi-viz jackets bobbing around in the far distance. Turns out it was a subcontractor replacing a couple of panels in the banking. 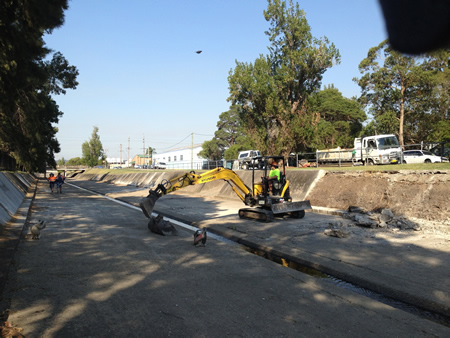 Quite how the powers that be pick the ones to keep and the ones to replace escapes me. Dave reckons it’s based on cracking at the lower edge, but those panels up by Hamilton North School all look pretty solid to me, while the ones down by the railway bridge have just about disintegrated. 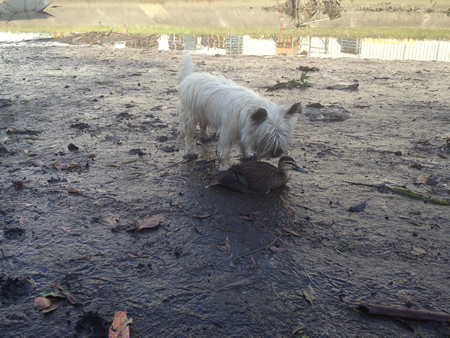 I think it was a juvenile with a foot injury. It couldn’t make it to the water in time and, even though Jambo chases birds with that relentless doggie optimism, even he was nonplussed by this chap. Oooh kay. I’ve got one. Now what?

And now that I’ve got us onto birds I can talk about the brown goshawk that’s appeared around the gasworks. (I rather like that: the gasworks goshawk.) It seems that the gasworks can support a range of raptors at any one time; the other day I saw a kestrel, a black-shouldered kite and the brown goshawk all perched or patrolling within a fairly short distance of one another. But no bigger raptors for a while now: no peregrines or swamp harriers. As the man said, “Why is it so?” 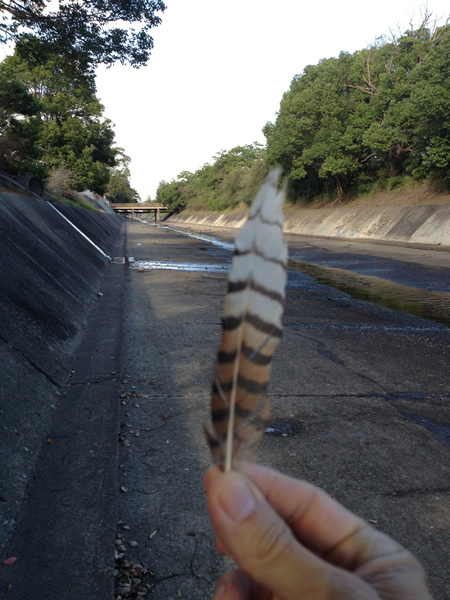 The recent rain flushed away all the rubbish, so it’s no longer my problem. (Hey surfers of Newcastle: a gift from Hamilton North headed your way!) There are a couple of new trollies but the bottles have yet to start building up by the TAFE litter boom. Curiously, a chair and a purple ball appeared. This ball was like a marker for a few days, slavishly following the tide up as far as Chatham Road then whizzing back down to Islington. 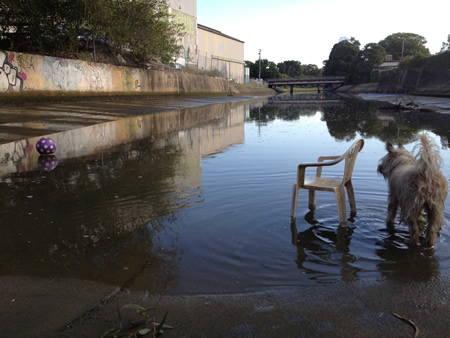 Then … gone. Maybe a walker picked it up and took it home.

The picture of the gas holders in the previous post generated a lot of feedback. This archive pic is much older, and the lens that’s been used makes it quite hard to orientate, but I think it’s been taken towards the rail bridge looking towards the back of the admin building. What do you knowledgeable folk think?

Merry Christmas to all you creek connoisseurs, drain devotees and waterway wanderers from me, Jambo and the ever-returning Yuletide bauble! 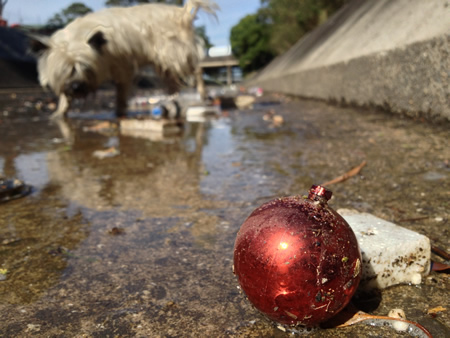 Oh, and the boys and girls at Gonninan’s put up a tree for you too.

Hearts of Midlothian, the Jam Tarts, the Jambos, the only Scottish football team to be named after an Australian cairn terrier, are a happy bunch tonight! 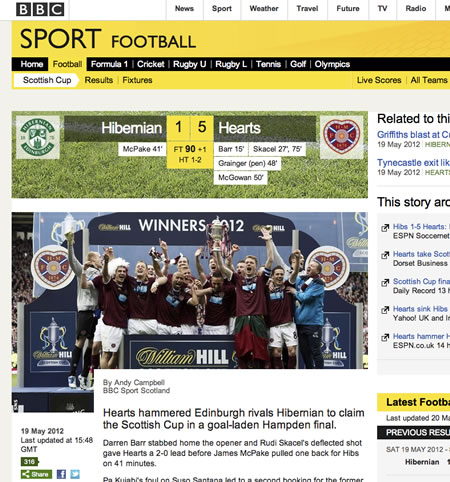