A total fire ban today, with conditions described as “extreme”. It was horrible in town around midday, with dusty whirlygigs swirling around council chambers and the trees in Civic Park bent double by the hot westerlies.

The people at ELGAS have obviously been looking over the fence at the gasworks and feeling justifiably nervous. Recently they graded about 4 metres along the boundary as a firebreak. Still, I was surprised to see the lantana on the creekbank blackened from an intense grass fire the other day. Were they burning off or was this the work of kids, or broken glass, or a spark from the railway?

There was more inside, patches here and there which made me think it was probably a combination of school holidays, a dense fuel load and idle hands with a box of matches.

On the plus side, it hadn’t got far, and it also allowed me to see what had been hidden by the dense shrubbery and tall grasses. I can understand why some Aboriginal people describe burning off as “cleaning up country”.

The grading revealed other aspects of the gasworks’ former existence. The rows of fuchsias that bloom every year speak of a garden or border long since buried beneath the rubbish and discarded mess of a former-industrial site. But the grader blade also brought up these little guys. Someone must have loved them once upon a time. Maybe they had names, and piggy would get a pat on the head.

A little bit of  folk-art too, a tin fairy or garden elf. 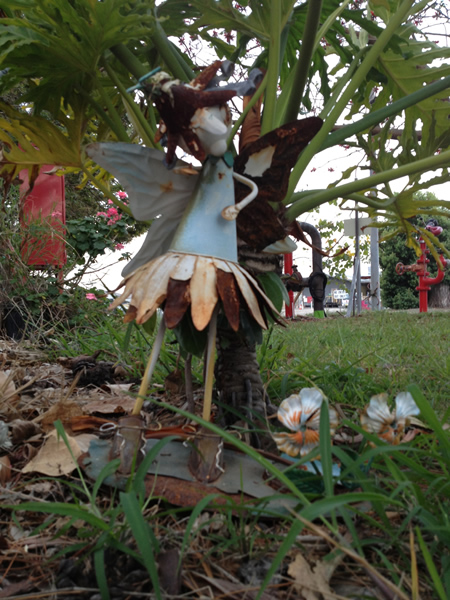 Back in the creek I was reminded of how lacking in imagination and handicraft is the modern-day equivalent of the garden ornament. I mean, he looks chirpy enough, but compared to the tin and the ceramic pig he has a sense of the disposable about him that precludes any kind of emotional attachment.

A full moon last week. It was gorgeous, and in spite of the hot weather I am, for the first time in a few seasons, actually looking forward to summer.

But come back and ask me at the end of November. Guaranteed, I’ll be sick of it!