I’ve been away for a few weeks on an important study tour, comparing the drainage systems of Newcastle with those of Cumbria. Unfortunately, my companion Jambo couldn’t make it to the UK. As I walked over the fells and sandy headlands of my old home I kept thinking how much he’d be enjoying himself. Instead, we hooked up with some visiting Kiwis, John and Val. We presented the opportunity as a house-sitting arrangement with the added extra of caring for a dog, when in truth it was caring for a dog with the added extra of having a house.

I got back on Saturday, and that afternoon the two of us returned to the drain.

The big rains of December had scoured the bed, and the follow-up rains meant that there was barely a polystyrene cup or fag end to be seen.

I was thinking, as I rounded the bend towards the railway bridge, how little had changed. There was a new roll-up next to the WORLD PEACE one. WORLD PEACE next to GODLESS seemed somehow … something. Not ironic; in fact, quite the opposite. The state things are in at the moment we’re more likely to see world peace in a Godless world.

A black-shouldered kite swooped and heckled a grey goshawk, something I’d never seen before. I’d always considered these little kites to be quite delicate creatures but it really gave it to the goshawk. 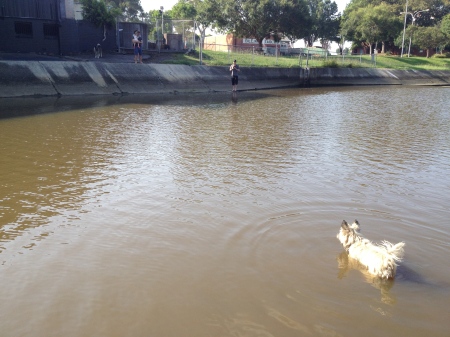 Here was something different though. As we arrived at the weir by the TAFE we saw a group of people with a dog and an electric remote-controlled boat. Jambo was fascinated and in he went. There was a time when he’d have swum over to find out was going on. If it weren’t for his incessant curiosity I’d never have got to know Old Mate and might never have written A Year Down the Drain. But this time he was content to stand and watch. Is he getting old? He did turn six on Boxing Day but that’s hardly old for a terrier.

Maybe things are changing around me more than I’d realised. What will 2016 bring? What will I think about the year when I re-read this post, in January 2017?

Which is perhaps a rather maudlin way of wishing you all a happy new year. I think!

I thought that the rain we got the other week would result in a banker but it was such a slow, steady fall that the creek just rose, nice and slowly, and then fell, nice and slowly. The kind of rain the farmers love.

I always have mixed feelings about rain after a prolonged dry period. The creek gets so clogged up with gunk and rubbish that it’s kind of cathartic to have it all swept away by one huge, cleansing flood. But then I know that all the crap has just been shunted down to Carrington mangroves, or the harbour, or the beach.

There was an article in the Herald about the OdysSea group, who are encouraging people to litter-pick along the beaches. They’re great, those young folk, and I must admit I rather  envy them. The beaches are so iconic and so beautiful that it seems like a no brainer to ask help keep them clean and for people to respond. The creeks just don’t have that same emotional kicker. I pick stuff up but, let’s be frank, I ain’t gonna make much of a dent in this lot. And anyway, it’s just the drain.

Sometimes I don’t pick things up, deliberately. Big Ted, here. He’s not going to be accidentally swallowed by a cormorant or a turtle. Where will he go? Who will find him?

Not far, as it turned out. He staggered ashore down by the TAFE, still wet, a few days later. Don’t know where he is now. 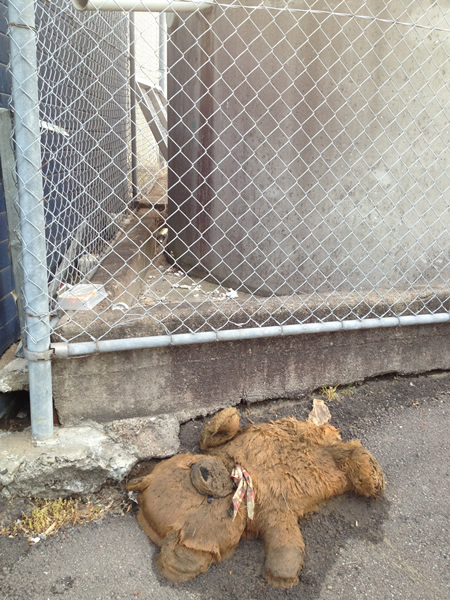 Other things are just too elusive to pick up. This sign, from a car yard, teased me for at least two weeks, always bobbing up and down with the tide, always a good couple of metres offshore. Come and get me! Nyaah!

As well as the litter pollution the creek’s been suffering from the subterranean movement of oils, tars and residues from the gasworks and the petrol depot. This always speeds up when the warmer weather arrives; September isn’t just the month of koels and channel-billed cuckoos, it’s the month of gaseous miasmas and heady, bituminous pongs … 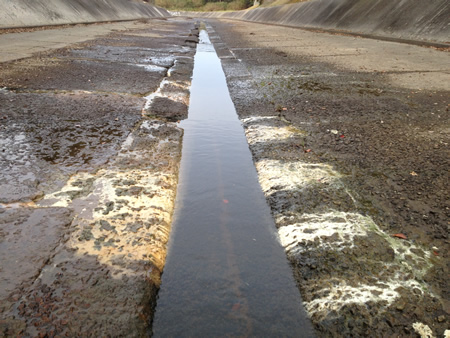 … and intriguing canisters of unknown origin that are impossibly tempting to your average cairn terrier. 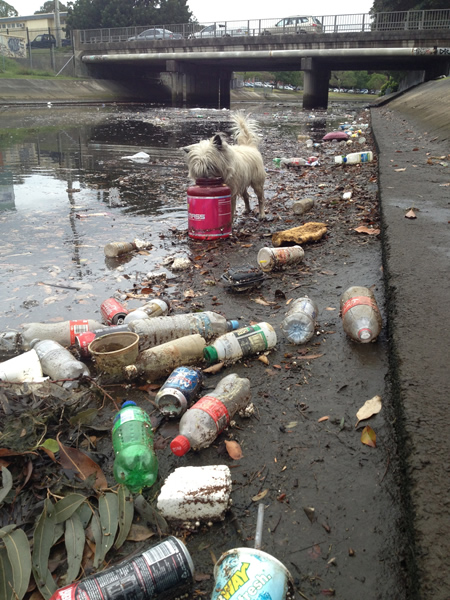 But if I’m feeling slack and not picking up, the creek will always send me a reminder of why I should do the right thing. Saturday morning and, as the tide turned and pulled the bottles and cans and cigarette ends and lumps of polystyrene foam and nerf bullets and tennis balls and busted thongs out and down and away towards the harbour, this sad sight drifted past me. Another cormorant casualty. A young, healthy-looking bird. What had it swallowed? What had gotten caught and twisted in its gut? 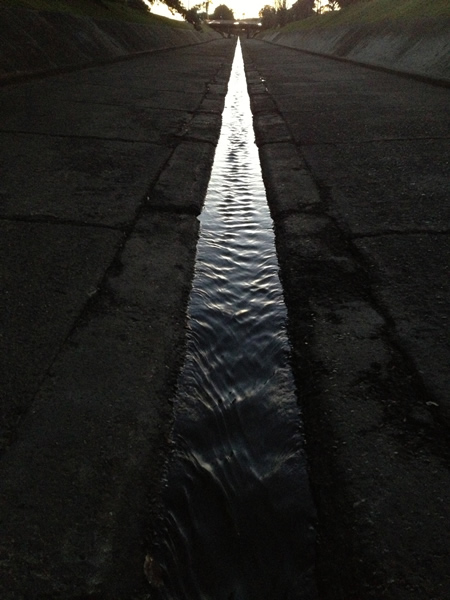 Newcastle is the poorer for the loss of Professor Behooving, though our loss is Tasmania’s gain. And, let’s face it, with fire blight and cheap imports, the Apple Isle needs all the help it can get. However, I was delighted to get an email from the Prof recently, pointing me to a brilliant documentary on YouTube about Nick Papadimitriou, aka The London Perambulator.

I was put off at first by the length (45 YouTube minutes are like several real-time glacial epochs) and so I didn’t watch it through till the other night when The Circumstances were Just Right: suddenly-cooled weather, a flogging at the dojo that left me with aching muscles, and the wife saying “Do you want the water leaving in?” after she climbed out of a volcanically hot bath. It was time! (Watching videos on your iPhone in the bath might seem like crazy, risk-taking behaviour but that’s the way I roll.)

This is a brilliant show. Nick is a walker of London’s “liminal lands”, a researcher for authors Will Self and Iain Sinclair, but also a teacher, a stoner, a polymath, a convicted arsonist, and just a wee tiny bit of a nutter – nutty in that delightful, slightly weird, English kind of way.

I once saw a show on SBS in which Will Self walked from his home in London to Heathrow Airport, then flew to Los Angeles and walked from LAX to downtown. Sinclair describes these tracts of land between homes and airports as “the ultimate shock-corridors of deregulated urbanism”.

“Shock-corridor”: what a brilliant phrase! I’d love to apply it to my own “shock-corridor”, the creek, but in all conscience I can’t. Surprising, yes. Shocking? Hmm.

Maybe not. But when I’m down there I do get a sense of Papadimitriou’s “deep topography”. This is Nick’s own phrase, an evolved form of the psycho-geography that the Situationists coined as a response to the faceless urban environments of 1960s Britain and France. Apparently. Deep topography occurs through the process of walking while carrying a kind of mindfulness of place.

Walking is the key, and as the video shows it’s getting harder to be a walker in our cities. I once had to go to an event at the new Charlestown Bowlo and arrived there by foot. It was impenetrable; the only access seemed to be this deep, black rectangle into which cars disappeared like pellets into the maw some colossal beast. About 30 years ago I picked up a zine in an anarcho-syndicalist bookshop in Manchester (those were the days). The zine was called Away With All Cars, a ranting pamphlet by a certain “Mr Social Control”, head of the “outlawed Pedestrian Freedom Front”. I’d love to see what he’d make of Charlestown Bowlo. 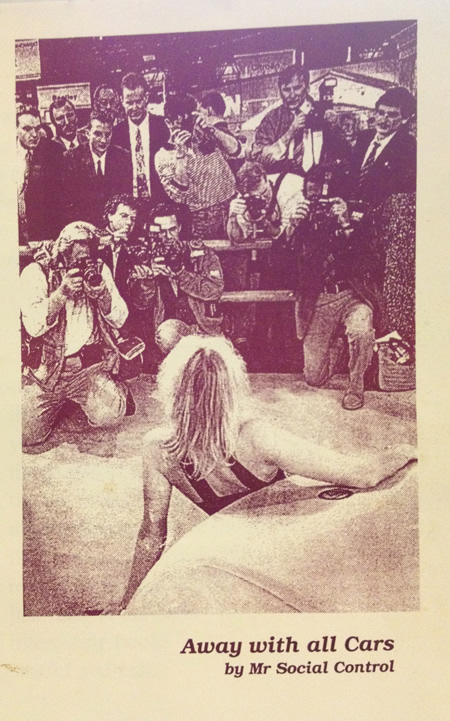 Here’s a bit of Iain Sinclair talking about the difficulty of walking in cities, and the way that walking (as Bruce Chatwin noted, in Songlines) creates its own narrative:

Ease of passage across the city is ever more denied and so the walker becomes somebody like a guerilla, he has to  duck and dive to negotiate a passage across the city. [Walking] is the way that narrative presents itself. I don’t think that any other form [of travel] engenders narrative in quite the same way. If you’re in a car, you’re in a pod, you’re in a kind of dream that’s sealed off, a kind of reverie. If you’re on a bicycle you’ve got to be so conscious of the traffic surrounding you just to survive. There’s no time to get into the stream of natural consciousness which is walking, and therefore walking becomes the most natural form for lifting your consciousness. I think that all the real spirits of the city are doing it all the time.

If only I could be that erudite and articulate! I’ll bet Iain Sinclair doesn’t wallow in his wife’s bathwater watching YouTube videos on his iPhone.

Today I perambulated upstream rather than downstream. I felt like a change and so Jambo and I headed past Hamilton North School and the Westpac Rescue Helicopter towards the Gully Line. To go this far you pass beneath several bridges, at Griffiths Road, Broadmeadow Road, and the new pedestrian bridge by the showground. The bridges provide punctuation marks in the linear narrative of the creek; they’re places to pause, tag, paint, sleep, shoot up, pull the heads off a few prawns, cobble a bong together.

It was nice, but I prefer downstream. I prefer the brackish water of the intertidal zone, the delta where the salt water has pushed up through Throsby Creek and melds with the fresh water that pours endlessly from the hills around Adamstown. But I don’t ever come back from the creek feeling shocked or disassociated from the urban world. Unlike this happy person. 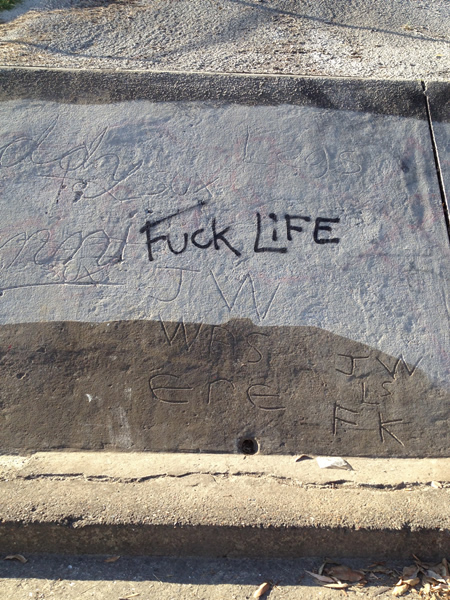 I wonder what he’d make of the Situationists.