The Inspector of Nuisances

Because of my work as an editor I subscribe to the online edition of the Macquarie Dictionary. They sent me a user survey to fill in the other day; various questions about my age, previous editions of the dictionary owned, things that could be improved and so on. One question stopped and made me think: did I want to be able to see the entries immediately before and after my search word? I realised that I didn’t. One of the greatest pleasures of dictionary word searches—the serendipitous discovery—was no longer a part of my working day. When searching for a definition, the definition was all that I wanted. It was quite a sobering realisation.

In contrast, the time tunnel that is Trove has provided numerous opportunities to stumble across the delightful and arcane when searching “Styx+Creek”. Here’s the Queensland news round up from the Newcastle Morning Herald and Miners’ Advocate of almost 127 years ago: Monday, 19 December 1887. It reads like something from Buzzfeed or Facebook (they have not been edited):

A man named Larry Pidgeon committed suicide at Croydon by shooting himself in the chest with a revolver. He had been drinking for the last fortnight.

A commercial traveller named Durkin, Brisbane, was being teased by some children. He struck a boy on the arm with his cane, breaking the limb.

A Church of England clergyman named George Horrocks pleaded guilty at the police charged with drunkenness. He was picked up in Harbot-street helplessly drunk on Thursday night, and locked up for protection. He was discharged. He is a venerable man, and a graduate of Oxford.

Which has nothing to do with why I was at this particular page.

The page describes an inspection of Throsby and Styx creeks undertaken by the mayor, a group of councillors and—oh yes! oh yes! oh yes!—”the Inspector of Nuisances”! After a lifetime in various employments I have finally, finally found the job for which I was placed on this Earth!

The newspapers from the early 20th century are filled with reports about how filthy the creek became after the arrival of the fuel depot and the Gas & Coke works, but this report describes the filth from the wool-washing works and the tannery.

Pollution from the wool wash was considered to be fairly low during regular flows, but when the creek became “sluggish” the smell became “very offensive”. The tanneries, however, were a different story:

[T]he waters opposite Tighe’s Hill were of the blackest dye, with an odour emanating therefrom sufficient to sicken one.

The tannery relocated to Maitland and, by the 1920s, there were reports of the return of “shags” (cormorants) and mullet to the creek. But then the gasworks and fuel depot really hit their straps.

A couple of years ago I wrote this post after seeing the guys from the ELGAS depot flushing their paint into the creek. I reported it to the EPA and Council, but didn’t hear anything back. The title of the post, It will always be a drain to some, proves that nothing has changed in the last century and a quarter. There has been no golden age in the relationship between white Australian and our urban waterways. We have always treated them as drains: vehicles to drain swampland for poorly conceived housing development; dumps for our rubbish; places into which we can hurl our shopping trollies or tannery waste or paint wash.

I think there’s only one thing to do. Bring back the Inspector of Nuisances. I am prepared to take on that responsibility. Vote 1 Mark MacLean: The People’s Nuisance. 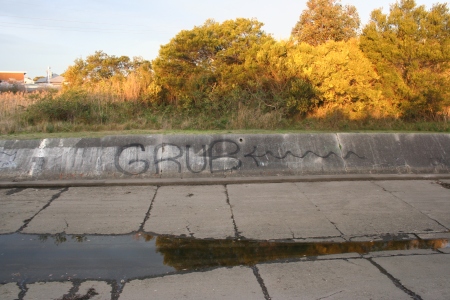 This entry was posted on Thursday, December 18th, 2014 at 3:50 pm and is filed under Around town things. You can follow any responses to this entry through the RSS 2.0 feed. You can leave a response, or trackback from your own site.

2 Responses to The Inspector of Nuisances