I’m in Alice Springs, a town in the Northern Territory. I lived here for a few years a while ago and now I’m back here for work. Much has changed, much has remained the same.

The town is framed by the McDonnell Ranges (I think I’m obliged by the Northern Territory Government to add the adjective “magnificent” before their every mention) but the real heart of the place is the Todd River. As the town has developed to the east, north, west and south the river is more than ever the environmental hub that provides the Alice with its focus.

Newcastle’s waterways are generally either tidal or only ever flowing at capacity after rain. The Todd, unlike Newcastle’s waterways, is a peopled environment. Don’t be fooled by the snake-like coolings of tyre tracks; they are not made by the vehicles of people who live here, but by the police and the night patrols. As Mr Hockey recently pointed out, if you’re likely to be living in a creek bed then you’re unlikely to be worrying about increases in fuel excise.

The Todd is, for the most part, entirely dry with a bed of gritty, dusty sand. But there’s more to this difference between the two types of river than just “wet versus dry” / “concrete versus sand”. At some point in Newcastle’s recent past we stopped peopling our waterways.

Here, each river red gum stands like a small island of activity. People scatter during the daytime but return at night to the small, scuffed fireplaces (or, in this case, makeshift camp oven from a half wheel hub). 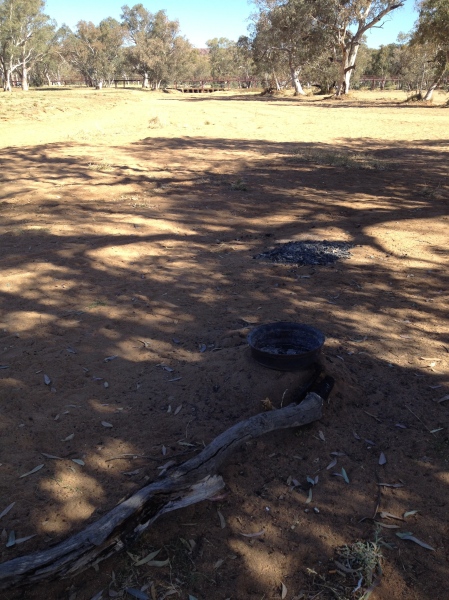 I’ve written before about people who, in our lifetime, remember swimming in the Styx and lazing on its grassed, sandy banks. The endless channelling and straightening, the concreting and fencing, the erection of “Danger!” and “Keep Out!” signs has resulted in a disconnection between the people and the water.

This entry was posted on Sunday, August 31st, 2014 at 10:55 pm and is filed under Around town things. You can follow any responses to this entry through the RSS 2.0 feed. You can leave a response, or trackback from your own site.