I usually map out a blog post as I’m walking with Jambo. I use the VoiceMemo app on the phone to record bits and pieces as I think of them; for a strange reason that I haven’t been able to fathom I always start each memo with the words, “Something about …” as in “Something about the huge eel under the railway bridge” or “Something about the way all the aerosol cans washed up in the right order, like a paint chart”.

Unfortunately, while I had it all sorted inside my head, I didn’t record any of the brilliantly articulate and witty thoughts that were going to be the contents of this post. The only thing I can remember was the title, “Ooh! Fecundity!”, which in my head was uttered in the kind of voice Frankie Howerd used in Up Pompeii!

I know. I blame my English childhood.

I think the forgotten post was all about the season of mists and mellow fruitfulness that’s going on at the moment. The other night the sky was filled with flying foxes against the full moon, squadrons of them swooping to catch great gulps of water from the creek.

Around dusk on another evening I came across a sight I’d not seen before so far upstream: a large school of mullet bottom-feeding in the shallow muddy water of the beck. They were so densely packed that their fins jostled and bumped against each other, their tail fins sitting vertically out of the water as they nosed the rich slurry of the creek bed. They barely stopped even when Jambo waded in to investigate. 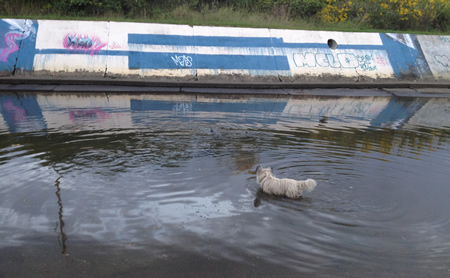 It is nearly Easter after all, which in my mind will always be a springtime event but in Australia is a signal for the onset of cooler nights, of ANZAC Day parades and dark mornings. And, for these guys, the mullet runs up the coast.

A pair of falcons whizzed overhead to perch on the fuel depot towers. I recorded their call but I don’t know what they were; by profile I thought they were peregrines (with the distinctive scimitar-like wing profile) but they had pale underbellies and seemed too small. Hobbies, perhaps? Or grey falcons? Do we get grey falcons this close to the coast? Either way, they’ve been busy.

And this morning a gigantic fungus!

My mole at the CMA thinks it might be “an Agaricus of some sort”. Which means nothing to me. But it does rather sound like a character from Up Pompeii!, some sexy Nubian slave lady whose top falls off whenever Frankie Howerd shakes his sistrum.

This entry was posted on Wednesday, April 16th, 2014 at 4:19 pm and is filed under Around town things, Drowned things. You can follow any responses to this entry through the RSS 2.0 feed. You can leave a response, or trackback from your own site.

One Response to Ooh! Fecundity!