Our urban world is so noisy. Our ears are endlessly assaulted by clangs and bangs and amplified tat. But once you’re in the drain the world slips away; or rather, the sound of the world slips away. The sounds I associate with the Styx are those of bird song: the up-and-down melody of willie wagtails, the harsh rasp of herons and egrets, the metallic tzing! of wrens, the liquid burbling of fuscous honeyeaters, the chesty coughs of ducks and teal. Though not this duck. If he ever had a squeak then he’d lost it by the time he turned up here. 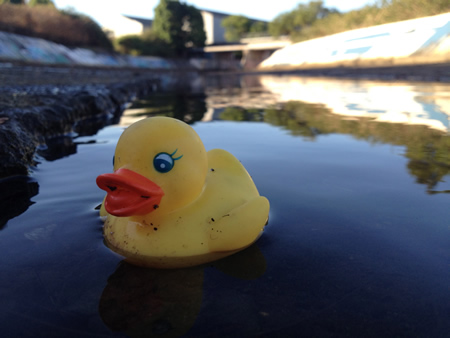 But the other day, as I rounded the bend and headed towards the Chinchen Street bridge, I heard something I hadn’t heard in years: the violin solo that ends The Who’s Baba O’Riley. It must have been on the radio in the Big Shed, on at full blast and bouncing around inside before escaping through the wee roller door by the creek. The echoing and reverb made Dave Arbus’s electric violin even more ethereal than normal and for thirty seconds I was transported back forty years to a cruddy turntable and My Favourite LP Of All Time At That Time:  Who’s Next.

The Who was the first rock band that I became obsessed by, obsessed in that teenage way. For a few years, until punk’s Year Zero, their music was hugely influential and for a few moments on the creek bank that morning I preferred the sound of FM radio to that of honeyeaters and insectivores.

Then it ended, and an advert for carpets or doors or window tinting came on, and the spell was broken.

By the time I’d done a loop past Islington School and the weir they’d knocked the radio off and it was back to the ducks and the swallows whit whit whit across the water’s surface, pigeons cooing under the bridge and mob of ibis honking on the grass banking near the petrol depot. Normal service resumed.

This entry was posted on Thursday, October 17th, 2013 at 1:29 pm and is filed under Around town things. You can follow any responses to this entry through the RSS 2.0 feed. You can leave a response, or trackback from your own site.

4 Responses to Who’s next