After a few weeks away in sunny England I’d expected the drain to look more different when I got back. It looked almost exactly the same as I’d left it at the end of June, though a bit danker and slimier than usual as the sun hasn’t been warm enough to dry a crust on the sludge, and where the litter backs up against any blockage in the beck an unsightly brown froth had developed. Yuk. 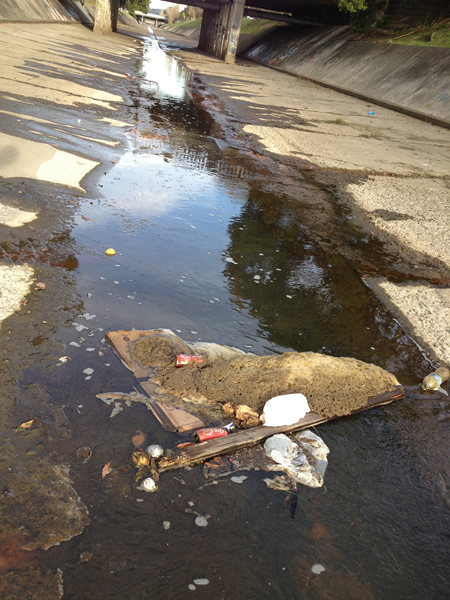 Since doing the marine debris workshop, hosted by OCCI, I’ve found it impossible to stop classifying rubbish. Or, at least, trying to classify rubbish. Under which category do I count a home-made cricket ball formed from rolled-up gaffer tape? The Y-shaped plugger part of a thong (minus sole)? The 100 metre-long tape from a video cassette? Bigger objects, such as gym shoes, are easy. 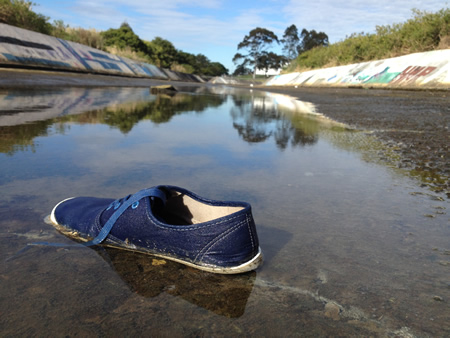 Someone’s been collecting balls, so I haven’t classified them or recycled them. I usually take the soccer balls, hand balls and suchlike  to Hamilton North Public School but not I the tennis balls as they’re prone to gathering a horrible layer of grime around their fuzzy outers. Jambo is unimpressed by them too as their roll, when thrown along the concrete creek bed, is far too dull and predictable; he prefers the jittery unpredictability of a rubbery hand ball. Picky little bugger!

As an aside, there’s a Facebook page about the OCCI clean up held at the end of last month. I was staggered to read that we pulled out “410 straws & confection sticks; 168 bottle lids/tops; 231 plastic food wraps; 145 pieces of hard plastic; 249 soft plastic remnants; 257 foam remnants; 36 foil wrappers & 20 rubber balloons or toys. In total we collected 30.2kg litter from 2 5m stretch in 50 mins!” Holy smoke.

One littery item that’s common in the drain is cigarette packets. I can’t wait for plain-wrapping legislation; I hate seeing these images! 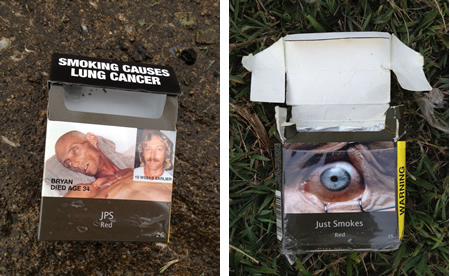 I came across a relative rarity: an aluminium cigar tube. It didn’t have the nasty pictures of dying cancer sufferers on it but it did have a somewhat ambiguous message.

The camelia bush down the nightsoil lane has shed blossoms all winter. I do love the contrasting mulch of perfect new blossoms next to the squishy, dead brown ones of yesterday, last week, last month. The kind of thing I’d expect to see in the background of some seventeenth-century Dutch master’s portrait of a successful trader to remind him that death is waiting round the corner.

And on that happy note, I’ll bid you adieu!

This entry was posted on Friday, July 19th, 2013 at 3:14 pm and is filed under Around town things. You can follow any responses to this entry through the RSS 2.0 feed. You can leave a response, or trackback from your own site.

2 Responses to Plus ça change