Bringing hope to the masses

What, ladies and gentlemen, is this?

Is it: (a) an hilarious toy; (b) a potential death trap for a sea turtle;  (c) a piece of soft, fabric-based marine pollution; or (d) all of the above? Yes. Whatever. It’s part of that thing, an “environmental problem”

The problem with the “environmental problem” is that (unlike the water bomb) it’s so bloody big. And not only is it absolutely humungous, there’s the horrible and distressing knowledge that much of it could be solved in an instant if only THE IDIOTS would listen to us. It’s enough to make you swoon into a funk.

So after you’ve shouted at the internet or the telly because some amalgam of global corporations have once again stomped all over the community’s wishes for <consumer deposit legislation / better urban planning / insert whatever appropriate cause> then it’s useful to gather yourself up and head towards the nearest group of likeminded folk.

This weekend I went to Tighes Hill Public School to learn how to identify litter. No, seriously. Because this is a serious business. The Ocean and Community Care Initiative (OCCI) hosted the morning, supported by the HCRCMA, and introduced about 15 of us to the concept of litter logging. Here we all are, ready to go by the Carrington mangroves. 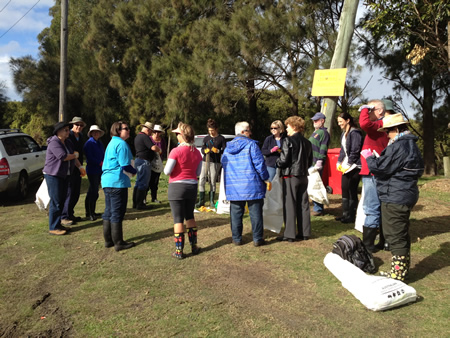 Litter logging is a system that’s been developed by Tangaroa Blue to quantify the crap, which in our world of bean counters and accountability is a necessary way of countering the arguments that global packaging corporations use to sidestep responsibility for the state of our oceans and waterways. So they gave us bags and gloves and “slates” – rewritable boards with all the different types of litter listed on them. Then, every time we picked up a piece of litter, we logged it on the slate. Every cigarette butt, foam bead, torn piece of plastic wrapping, syringe, water bomb …

Here’s the editor the OCCI newsletter, about to go insane after logging his 13,915th Minty wrapper before chucking it in the dirt bag.

After 50 minutes we’d picked up, logged and bagged about 50+ kilos of stuff. On recent beach walks these heroes gathered and logged over 500 kilos of rubbish over a 6 km stretch. All the data then goes off to Tangaroa Blue and is entered into their online database. And then we send it off to The Man. In your face, neocapitalist pigs! 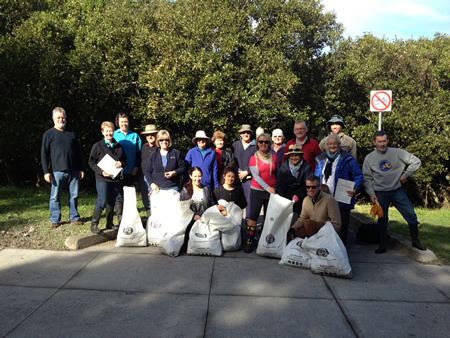 It’s one of those tasks that seems just too brain-sappingly large to contemplate, but I know that it has a purpose. And a good one at that. So I’m getting me a kit for the Styx and I’m going to start logging the crap that comes bobbing down the beck. Now, was that water bomb a piece of soft, fabric-based marine pollution, an hilarious toy or a foam death trap?

This entry was posted on Sunday, June 23rd, 2013 at 2:22 pm and is filed under Around town things. You can follow any responses to this entry through the RSS 2.0 feed. You can leave a response, or trackback from your own site.

One Response to Bringing hope to the masses