Reed beds and mangroves are often described by natural resource management people as the “kidneys” of our estuaries, filtering out the rubbish in the freshwater system before it hits the ocean. If that’s the case, then the mangroves around the Carrington board walk must be ready to go on dialysis. I was down there the other day, taking a stroll with the Jambo and The Wife. The state of the place is enough to make you weep.

The vast majority of the litter that ends up in our waterways, and hence our reeds and mangroves, consists of discarded plastic drink bottles. Which makes the challenge by Coca-Cola Amatil, Schweppes and Lion Nathan to the NT’s container deposit legislation hugely galling. As though these guys aren’t making massive enough profits from fizzy water with sugar in it? (You can sign the GetUp! e-petition supporting the NT Government here if you’re up for it.)

The Styx is the collection point for several smaller creeks and waterways. Hunter Water subbies out the job of picking up the bottles, syringes, polystyrene cartons and other junk to a private company. I see the guys often, out with their whipper snippers on the banking, doing emu bobs with garbage bags or in thigh waders down by the TAFE. They do a sterling job but, in the face of the tsunami of litter that thoughtless people send their way, they’re always going to be fighting a losing battle. I mean, look at this from a couple of months ago:

But amidst the gloom, a small moment of … well, not exactly happiness, but certainly surprise It was Froggy! The last time I saw this little guy was in August 2012, by the railway bridge. 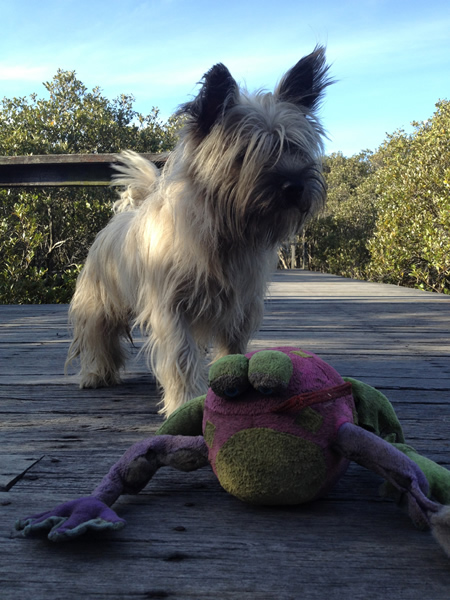 Somehow he’d managed to hitch a ride on a flood down past the TAFE, under the Maitland Road bridge, down the Throsby and into the Carrington mangroves. He’s a survivor!

Though of course he’s a survivor because he’s made of non-biodegradable unobtanium or something. So, hmm. Maybe I shouldn’t have been so pleased to see him after.

(But I was pleased really!)

This entry was posted on Wednesday, February 20th, 2013 at 2:00 pm and is filed under Around town things. You can follow any responses to this entry through the RSS 2.0 feed. You can leave a response, or trackback from your own site.