The next big flush

A couple of years ago I edited a book written by an anthropologist who worked with communities along the Murray and Darling rivers. This was at the height of the drought, about a year before La Nina came along nearly washed Brisbane away, and there was a common thread that ran through all the feedback: the river needs a big flush.

These big flush events can be mixed blessings. Of course it’s good for ephemeral marshes to be inundated but there’s also the spread of feral and pest species, the effects of black water on oxygen levels, the moving of filth into all kinds of unexpected places. But I was reminded of everyone’s desire for a “big flush” myself the other day as I passed under the Chatham Road bridge. It’s getting jammed up there with litter and filth and, even though I know it’s only pushing the problem somewhere else, I really wished for a big rain to take it all away.

Among the trash was this beautiful feather. Is it a goshawk? Or maybe a koel. I’m not sure.

It certainly doesn’t belong to this young magpie, discovered at the foot of one of the figs in Richardson Park.

But in the midst of death is life, as it were. The gasworks is teeming with flies at the moment; it reminds me of being out bush in central Australia near a cattle station. (That’s my benchmark for fly-i-ness.) But my walks around there have been given a fun boost by my new best friend, H-FOOT. I don’t know who s/he is, but since I received my cryptic postcard I’ve noticed his/her markings all around the place. 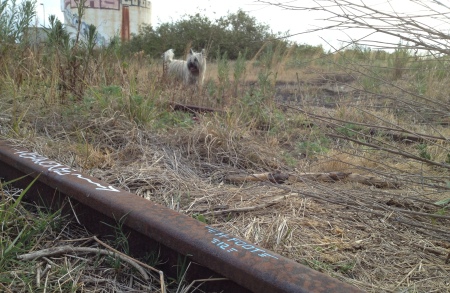 Am I being stalked? I do hope so! 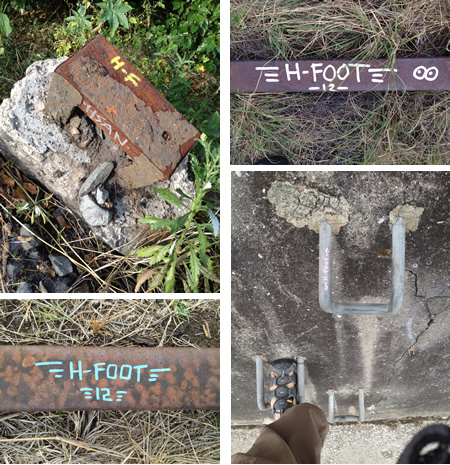 The cylinders in the ELGAS place are starting to gather, a bit like the wildebeests do before taking off on their mass migration across the Serengeti. The herd makes decisions about the elderly, the infirm, the weak and the rusty; they are “The Condemned”. 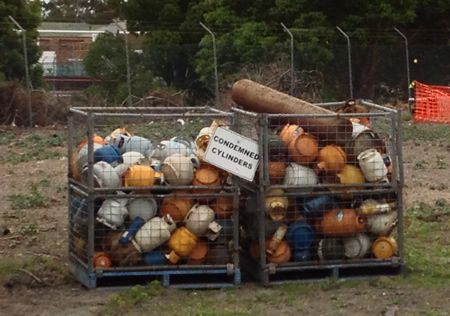 The rest group themselves into large packs. Actually, I’m not sure that the wildebeest analogy really works. They look more like something off a Pertwee-period Dr Who.

There’s also been a bit more graffiti activity in recent weeks. Is it seasonal? Is it linked to the mustering of the gas bottles?

The LDI boys have been out but, to be frank, I’m not impressed with their development. A couple of things they’ve done have been quite interesting but they seem to be stuck in big roller-coaster mode at the moment. The most touching development (and I don’t think it’s just the LDI crew) is the inclusion of gooey dedications to sweethearts: [heart] Alysa; georgia + bella. Aww.

I was interested to see a bit of the good old scratching-your-name-with-a-rock routine. Most of it was too rude to reproduce on such a genteel blog as this one, but I think that any encouragement to play urban tennis should be encouraged and applauded. (Is it like urban golf, or is it something rude that I don’t understand?)

The family of ducklings are still at nine, which is remarkable – especially given Jambo’s daily efforts to cull their numbers. I came across this unhatched duck egg. It must have been quite close to hatching; a little shake and I could feel the embryo rattling around inside. I was about to crack it open to see how developed the little ducky had been but something made me stop; I don’t know, something that made me feel that I should gently put the egg back on the floor and leave it.

It’s still there. At least, until the next big flush.

This entry was posted on Thursday, November 8th, 2012 at 2:58 pm and is filed under Around town things, Drowned things, Round things. You can follow any responses to this entry through the RSS 2.0 feed. You can leave a response, or trackback from your own site.