The concrete for the bankings of the creek was mixed on site, back in the 1920s. It must have been quite smooth, in the olden days, but now it’s aged and weathered and there are places where you can see beach pebbles and shells, like splinters that have worked their way to the surface of the skin.

I thought that this was a shell at first, a perfectly preserved cockle shell, but when I touched it it was soft. It looked like one of those fancy Japanese mushrooms but it was a petal, though not a petal from any plant that I recognised.

We’re in that part of the season where we have a few hot days then a few cool days, each change marked by bluster and the roar of wind in the casuarinas and the rattle of gum nuts on the roof. The other sound I associate with this time of year is the tattoo of drink bottles on the creek bed. The tide picks them up and they bob around the litter boom by the TAFE, then the tide ebbs and they’re stranded till the wind catches them and off they clatter, eventually forming crescent-shaped middens until the next high tide. 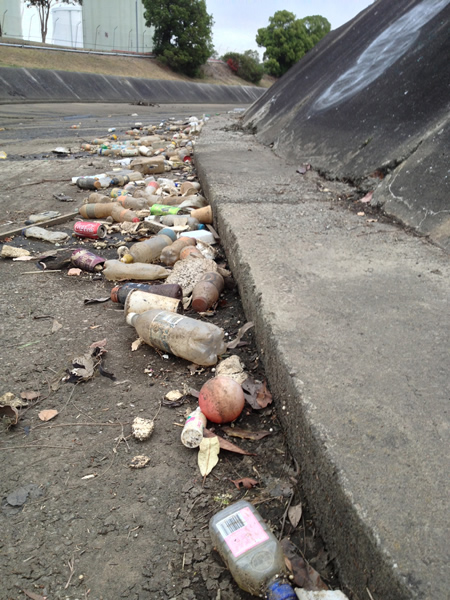 Leaves and branches do the same thing. The creek’s punctuated by chevrons of leaf litter, swales made up of sticks and leaves against which all kinds of detritus bangs up and knots itself.

I found another fish trap this morning. This one looks as though it had been put together as a foreigner at work, the frame being made of copper pipe. Or perhaps copper is used to avoid the corrosive effects of salt water. Does anyone know?

I also found a fiver. Yay! I love finding money in the creek. It has a special carnival kind of feel and I always make a point of spending it on frivolous things like Mars bars, takeaway curries, foam hats, whistles, chocolate-flavoured custard or stink bombs.

I held this fiver to my ear. It was a bit wet and was a bit green on one side (the fiver, not my ear) and it whispered one word: “Cider”.

This entry was posted on Saturday, November 3rd, 2012 at 2:59 pm and is filed under Around town things, Found things. You can follow any responses to this entry through the RSS 2.0 feed. You can leave a response, or trackback from your own site.