Our Christmas Eve tradition is to have fish and chips with friends at Bar Beach, followed by beach cricket and a couple of beers. It was a perfect day followed by a perfect evening that defied the pessimistic forecast of showers, a day so good that we stayed dark. By the time we got home Jambo was VERY ready for a walk and so, even though the light had gone, we set off down the creek to the railway bridge and back.

In the western sky was Venus, while over the east was Orion, the Hunter. Orion’s belt was one of the few constellations (or parts thereof) that I could ever pick out in the northern hemisphere when I was a boy, and it’s comforting to see those familiar three stars here on the other side of the world.

The darkness allowed me to focus on the sounds of the creek: crickets and cicadas rasping out tziiit tziiit tziiit, crrrk crrrk crrrk; traffic rumbling over the Griffiths Road bridge; the hoarse roar of the venting fans in the tin shed in the fuel depot that spin round, night and day, all year; fruit bats bickering in the Richardson Park figs; one final lonely coal train, with a driver on triple time.

The morning, Christmas Day, and we followed the same route, though everything was different. The only highlight was a Heineken keg bobbing around in the early morning high tide. 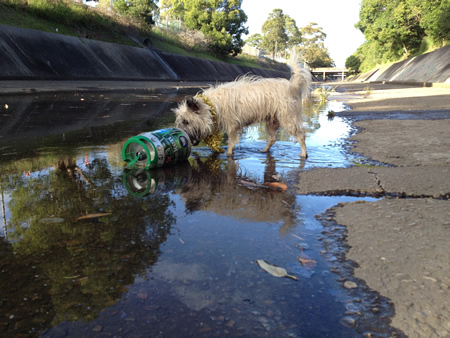 The family went to the beach again in the afternoon. There were squally onshore winds, though the water was still beautiful and refreshing. But the story in the creek, when Jambo and I went there that afternoon, was different. Those same onshore winds had blown the litter that had been held up by the boom back upstream, some of it as far back as the Chatham Road bridge. It looked horrible. 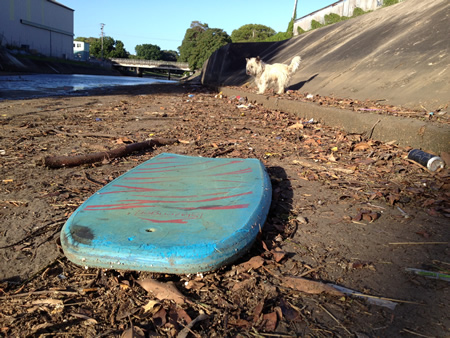 Then, redemption. My very first post in this blog was a photo I took in January of a discarded Christmas bauble and I wondered then if it was a fluke. Fortunately the Christmas gods smiled upon me and sent this little red bundle of joy to take the edge of the cigarette packets, busted toys, Fanta bottles, broken foam boxes and Ironlak aerosol cans that otherwise decorated the creek like a bedraggled tree.

Merry Christmas to everyone who’s followed or commented on the blog, bought the book, or bailed me up on the street to pass on an interesting fact or funny anecdote. See you down the creek in 2012.

This entry was posted on Sunday, December 25th, 2011 at 8:31 pm and is filed under Around town things, Found things, Round things. You can follow any responses to this entry through the RSS 2.0 feed. You can leave a response, or trackback from your own site.